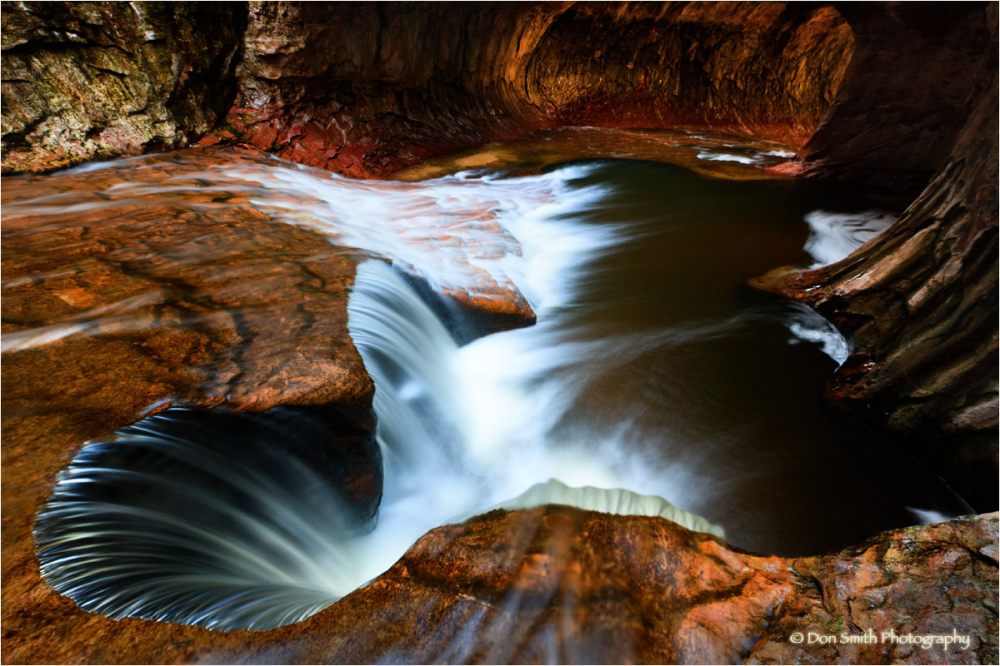 I've just returned from a scouting trip in southwestern Utah's Zion and Bryce Canyon National Parks for my upcoming Fall Workshop, November 1-5. A good friend of mine, Dr. Pierre Steenberg, joined me on the trip and is an excellent landscape photographer as well as a fun travel companion. We had both visited Zion in 2008 and discussed how we would one day like to hike and photograph the famed Subway. I mentioned to Pierre before leaving that if things worked out with my scouting (I already had much of the workshop planned), that I may be able to put a day aside for the hike.

Upon arriving, we jettisoned to the Visitor's Center to inquire about permits. We were told that indeed we could come back the next day and chances were good at this time of year to secure two. We were also warned that there had been a flash flood three weeks prior and there would be much debris to navigate through the canyon along with unusually high water levels of the left fork of North Creek. We even had a local photographer warn us that we may not be able to reach the Subway because the water would be flowing dangerously high. He also went on to note that if we could reach it safely, we would have some unusual images as most photographers don't attempt it when the water is this high.

We thought long and hard about the potential of a difficult hike resulting in no images but decided to risk it and treat it as an adventure; if we got shut out, so be it. With permits secured, we took off the next morning for the 10-mile round trip through the rough canyon. The only option for us was to go bottom up, as top down required some repelling and canyoneering skills neither of us possessed.

After a mile of navigating steep terrain (the canyon hike is rated 3BIII - essentially an all day hike through a canyon and water), we reached North Creek and began our assent to the Subway. We soon discovered that the recent flash flood had upended countless trees and bushes as well as some boulders. On top of that, we encountered four sections of the canyon where major rock and hillsides had collapsed causing even more careful detouring. We repeatedly hit dead ends on what was left of the trail and had to criss-cross the creek at least 10 times each direction, sometimes hiking backwards to find a safe place to cross. Fortunately, we had rented dry suits, neoprene socks and creek boots before departing from a local mountaineering shop.

After 3 1/2 hours of rugged hiking (I remember one semi-flat stretch of about 60 yards the entire way) we reached the Cascades, a beautiful set of gentle cascading falls over red slick rock. Pierre had found the slot where the constant rushing of water has cut a deep slit in the slick rock, but I was unable to photograph it because the surrounding water level was too high. I began to walk up through the water and eventually lost my footing when I stepped on a patch of moss and off I went. My top and sweatshirt (which was tied around my waist) was soaked in the icy snow melt. More mad than injured, we pressed on and eventually discovered our prize!

The Subway has been photographed by many photographers and is what I would term a trophy shot. Yet with the water level of the creek so high we felt that our images could indeed be a bit different from the multitudes we had viewed. In fact, the water was so high, we were still not convinced we could safely make it around the bend. It took a bit of maneuvering, but as you can see, we did it! The next trick would be in getting our cameras and lenses together as there was no safe place to lay out bags; instead, we took turns holding each others bags until we were both set, then put our packs back on. Fortunately Pierre lent me his jacket as a cool breeze was causing me to shiver with my drenched shirt.

I really owe the success of this image to Pierre as he stepped onto this narrow ledge bordered by two deep pools of icy water and called for me to check it out. I was somewhat hesitant as I weigh 70 pounds more than him and I wasn't completely sure how undercut the ledge was. If it was to give way, I would have been in the deepest of the pools you see in this image.

Fortunately, my 16-35mmL lens set at 16mm was enough to allow the line of the slick rock to complete and a shutter speed of roughly three seconds allowed the motion of the water to move the eye down and through the subway. To get this image framed properly required me to place one leg into the pool behind me and my foot instantly sank as if stepping into quick sand. I feared loosing my boot but was fortunate to slowly work my leg/foot out of the pool after completing the shot.

We spent an hour (that seemed to fly by like minutes) before we had to wrap as we needed four hours to get back to the car before darkness set in. We discussed if our images were simply more trophy shots of a familiar scene, but fortunately a search of Getty, Corbis, and Alamy showed nothing similar to our images. Lots of fall images and lower water levels, but ours appeared to be unique. I'm sure someone out there has something similar, but I would be hard-pressed to think of working this scene safely in any higher of water conditions.

The hike out was rougher than we had anticipated but we did indeed reach the car 30 minutes prior to sunset thoroughly exhausted. Was all my effort worth it? I'll let you the viewer be the judge. For me, I'm still soaking my soar muscles!

Stunning image Don, different and I think well worth the effort. This location has been on the list...can't wait to get in there one day.

@Mike: Couple things to know if you plan to do this hike. First, you must enter an online lotto three months prior to the planned trip that is held on the 5th of each month. Second, start your training now - think Half Dome hike - it's almost as grueling!

@Tinx: Thanks Tinx. I appreciate you joining in on my blog.

This is an awesome image Don and it makes me tired thinking about the hike to get there. I know how slippery those rocks are, I am impressed that you were able to get there and back safely. It's a good thing you and Pierre are strong hikers! I like the feeling of standing right there with the water flowing over the ledges. The clear water allows the viewer to see the color and details on the sandstone below! Great work and I hope you recover for another hike up there in the Fall!

@Scott F. Schilling: Pierre told me an interesting fact about the brain - it remembers pain, just not the intensity of the pain. I know I was not in the best of shape for this hike even though I hit the gym regularly. Plus I have been traveling and not sleeping much for the past two weeks. It was far from being an easy hike for me, but with proper rest and training, I could give it another go.

Perfect time! The shutter speed is simply right for this capture (my opinion). Great job!

@Sergei Z: I have many variations of this scene as you can imagine, but all are roughly the same exposure as it was very low light in the slot canyon. I liked the flow of the water at this shutter speed and other than changing the ISO, I pretty much had to accept my results.

This is realy nice Don!! Perfect capture of the motion of the water!

@Richard: Thanks Richard, see my reply to Sergei.

@Tede: Thanks Tede, a good day to you also.

Beautiful Don, took me a moment to realise what it is, such a surreal shape it through me then :)

@Matt Lomas Photography (MLP): I waffled on whether I should use this image or one that includes more of the top of the frame. In the end, I chose this image as it not only emphasized the water line better, but also in the other (looser framed) image, the tones were lighter on the top portion of the frame and drew the eye. I did burn the tones down but it still did not work as well as this image.

Perfectly exposed, and the curve as a third element makes for an outstanding composition.

@Ralph Jones: That curve is what makes the Subway worth the hard hike - it is an incredible creation by the forces of water in nature.

That looks surreal. Well worth the effort, in my humble/amateur opinion.

@Andrea: It's an incredible location Andrea - Pierre and I were certainly happy that the difficult hike was rewarded!

I think this is just amazing Don, and your narrative had my holding my breath! How exciting :) It is truly amazing!

@Elora: I know one thing Elora - I'm not getting any younger.

Somehow I missed this image the last few days - I am so glad that I went back to see if you had posted anything...I am so amazed at the look of the water flowing over the horseshoe in the lower frame here and the edge of slick rock you talked about. That part of it reminds me of a mini Niagara Falls...(pardon my stupidity but is that the "curve" or did I miss something? sorry) I can certainly see that there is a heavy amount of water. Your exposure and settings are magnificently done, as evidenced by the perfect (to me) light in the subway tunnel there, and the ease with which we can enjoy all the other facets of this composition - good heavens!...I also really like the beautiful look we get of the rocky surface under the water. Finally, I am really sorry that you fell and nearly froze - so glad you are ok - but thank God you took along someone with you...Geez. No way would I ever be able to make this hike with MY knees....I could be your driver though - if you just make it to the car I could take it from there ;-) Just a stupendous image Don and congratulations for this masterpiece...just wonderful!

@Denny Jump Photo: Not sure what you mean about the curve Denny??? I just hoped that I had a wide enough lens to allow the line of the falls to complete. It required me to stand in the freezing pool behind be but it worked out - fortunately!

HI Sir - I mean the horseshoe shaped puppy down here in the lower left hand portion of your frame -that water is flippin' awesome! GREAT shot I'm just glad you are ok!

amazing photo! the composition is superb and the dynamic feel and mood are just excellent!

Such an magnificent image. it is true great. your composition is stunning in the way the the water lined in the bottom left hand corner leads your eye into the image. really well done. and thank you for sharing such great images with us.