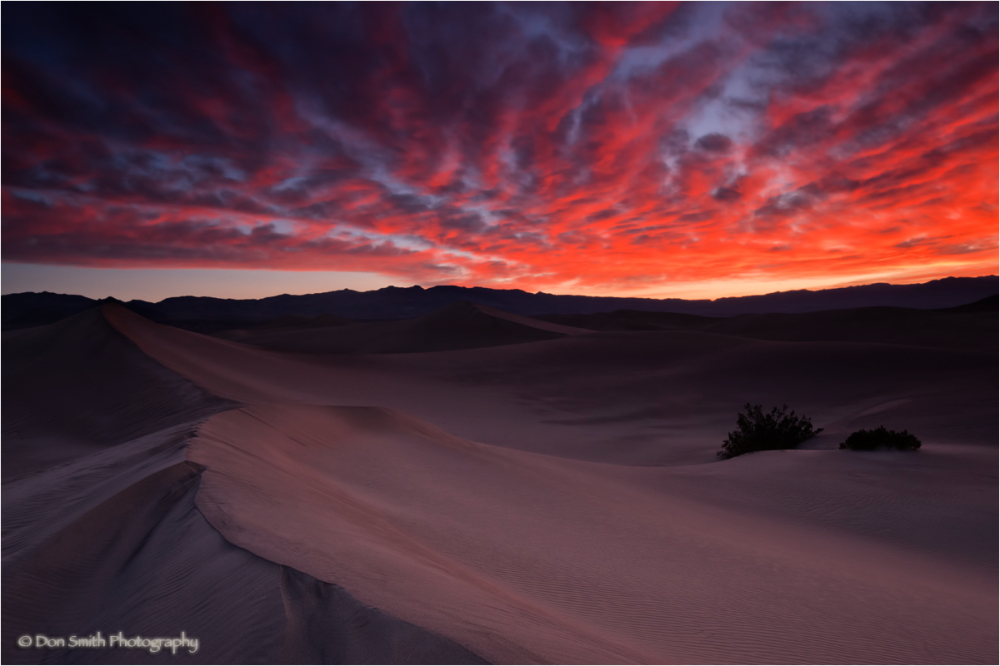 Sand Dunes have always held my fascination. Not that I have visited many, but I have resided near the the coast my entire life and used to spend hours exploring the dunes near Monterey, California as a child. When I got a bit older, my brother-in-law built a dune buggy and we'd head off to nearby Marina for some fun (those dunes are now off-limits to any human form - if only I was a snowy plover)!

Death Valley (the site of today's image) was my first experience with dessert dunes. The Mesquite Dunes near Stovepipe Wells is an awesome example of eons of wind creating a magnificent site. The largest dune (center) is called Star Dune and is relatively stable and stationary because it is at a point where the various winds that shape the dunes converge. The depth of the sand at its crest is 130–140 feet (40–43 m) but this is small compared to other dunes in the area that have sand depths of up to 600–700 feet (180–210 m) deep.

The primary source of the dune sands is probably the Cottonwood Mountains which lie to the north and northwest. The tiny grains of quartz and feldspar that form the sinuous sculptures that make up this dune field began as much larger pieces of solid rock. Eons of wind have served to form the present-day dunes.

In between many of the dunes are stands of creosote bush and some mesquite on the sand and on dried mud, which used to cover this part of the valley before the dunes intruded (mesquite was the dominant plant here before the sand dunes but creosote does much better in the sand dune conditions).

The dunes are perhaps the number one attraction for visitors to the Valley, which in turn, make it hard for photographers to find pristine sand. Wind is what is needed to sweep the dunes clean but is not always present. Though this particular dune line served to lead my viewer's eye through the frame, it was unfortunately scarred by a set of footprints to the left of the ridge line.

I captured this scene prior to sunrise with two other photographers while assisting Gary Hart in his annual Winter Death Valley workshop. While the majority of our group worked atop a dune to the right of this frame, a couple of workshop participants asked if we could walk here. I called out to the group that I was going and anyone was welcomed to join me.

I opted to photograph this scene with my 24 mm tilt/shift lens as I felt it was extremely important to hold sharp focus from foreground to background. As the rising sun neared the horizon, the stratus clouds lit uniformly and I made my frame. I used a Singh-Ray 2-stop hard edged graduated neutral density filter to balance the sky with the dunes.

Fortunately the footprints fell along the shadow side of the dune thus minimizing their appearance. I only allowed a small portion of the shadowed side of the dune to fill the frame as shadows hold a lot of visual weight. Had I tried to center the line or move it more towards the right side of the frame, the shadow (and it's accompanying visual weight) would have increased and made the frame appear off-balance. Careful placement of the two creosote bushes on the bottom right of the frame helped to further balance the overall scene (and shadow).

oooh, I like this very much. Great color in the sky, and great lines in the sand -- I love your composition.

@LauraS: We were fortunate to have a great sky that morning Laura. Sometimes, Mother Nature hands you one on a silver platter. If only we could have had the pristine sand!

@Richard: I appreciate it Richard.

@Nitin: These dunes have been photographed over and over, so to have a nice sky to work with was a bonus. I appreciate you taking the time to write Nitin.

Beautiful color and the cloud formations are fantastic!

@Elaine Hancock: Just held my breath that the clouds would light uniformly Elaine as the sun was rising to the far right of the frame.

You've, once again, outpassed yourself Don. It's like opening a window each time I visit you. Colors and air/space and shapes are then accessible, freely. It allows me to escape in this 3 dimension landscape, beeing aware of your respect and tender to our mutual Mother Nature. Your stare is of utter importance.

@Florence: I appreciate your kind thoughts Florence. I was a newspaper photographer when I first got into professional photography and there was a saying that was popular back then, f/8 and be there. One can spend all the time in the world planning an image, but sometimes all it takes is to show up! Of course as you know there is more to it than that, but on a morning such as this one, nothing else seems to matte. Hope you have a fantastic day!

unbelievable view and photo!
i like the structur and colors of the clouds!
brilliant! This location must be really a paradise for photographers, isn´t it!

@klausZ: Too many photographers if truth be known Klaus. Fortunately we were there in January when the Park is at its least crowded time.

This is simply breathtaking, Don!
Of course the gorgeous sky was an absolute bonus, but your wide shot lets our eyes explore the vast beauty of it all. It doesn't hurt that I've been there, and can visualize my being there in your shoes! ;D

@Judy aka L@dybug: DV had received quite a bit of rain prior to us arriving Judy and the sand was actually wet underneath. Made walking a breeze and as I'm sure you know, that is half the battle.

@Bill Brown: I appreciate it Bill.

@Monterey John: Thanks John. I see you listing Hollister as your hometown, did you just move here recently? If so, welcome!

Don, what a beautiful shot! It's got edges, light, color and shapes that really come together. Thanks for sharing.

@Chuck: Hi Chuck, thanks for taking the time to write. Hope you are doing well!

Wonderful work on this composition Don and I like your composition work with the line of the peak on the dune taking me into the scene! Wonderful color in this scene also! I'm finally coming back among the living!

Have a fantastic weekend!

@Scott F. Schilling: Glad to hear you are feeling better Scott. Not sure if I am 100% over this - tried the gym yesterday and it wasn't easy, but I'm getting there.

Don, congratulations on your spotlight feature! What a dramatic sky, very beautiful, but most I like the color and shape of the sand dunes in the foreground...

@Maria Draper: Thanks for letting me know Maria - I wasn't aware that this image had made Spotlight!

Beautiful indeed, Don. I must say, I first noticed the glorious pink but soon after was taken by the dark area with the silhouette...finally I noticed the light foreground and then, all of a sudden my eyes fell to the creosote bushes...how wonderful that placement is..I totally agree. they are just perfect there. Now, to me even with the absence of he bushes, the tonal and light contrasts between the sky, silhouettes and foreground sand with it's different "color," are beautifully captivating, but the bushes there really do put the cherry on top of the whipped cream. As a little kid, I lived in Alamosa, Colorado where we would often make trips to the Great Sand Dunes (National Monument at that time) and from that time onward, I too fell in love with sand dunes...This is magnificent, Don. i hope all you guys are 100% now. And congratulations on the spotlight for the day...woo hoo!

@Denny Jump Photo: White Sands is another spot on my "Bucket list" Denny - so many places to visit and so little time. Hope you are having a fantastic weekend.

In reply to yours ... yes, the wet sand was yet another bonus. ;D
I'm happy to see this made the Spotlight so quickly!

@Judy aka L@dybug: Much appreciated Judy - I didn't know until I read Maria's post.

Fantastic picture in this extraordinary landscape. Congratulations for the "Spotlight". Good day.

@cristoF: Thank you Cristo and welcome.

@Florindo: I appreciate it Florindo - welcome to my blog.

@James Guillory Photography: You know how important visual balance is to an image James. Some people can see it and others just feel it - kind of like athletes - there are the mechanical vs feel athletes - same with vision. I think this one I just moved the camera around until it felt balanced.

this is just amazing! superb composition and mood! the light is great and the colour tones in the sky complete the shot perfectly!

@DarkElf: It was a great sky - this one definitely got my attention early then I just hoped the light would make it happen.

@Sina Sohi: Thank you Sina - welcome to my blog.

tones and compo are wonderful. A very different experience of Death Valley!

marci from in, Morocco

gorgeous!! congratulations on the spotlight color!

@marci: I appreciate it Marci, thanks for taking the time to write.

What a nice picture !

Gorgeous ! Congrats on the spotlight colors !

@Céline: Thank you Celine, hope you are having a fantastic day!

@Tede: Thanks you Tede.

@Plichard Mickaël: Mother Nature was in a good mood that morning Plichard - thanks for taking the time to write.

@Co33: Thanks and welcome to my blog.

Nice shot Don...as usual. I love your use of negative space and selective lighting to channel the eye or emphasize elements of your compositions.

@Craig: Thanks Craig for your nice words!

really a stunning image. i like how the color of the sky is reflected on the dunes and how the crest of the dune takes one's eye into the image.