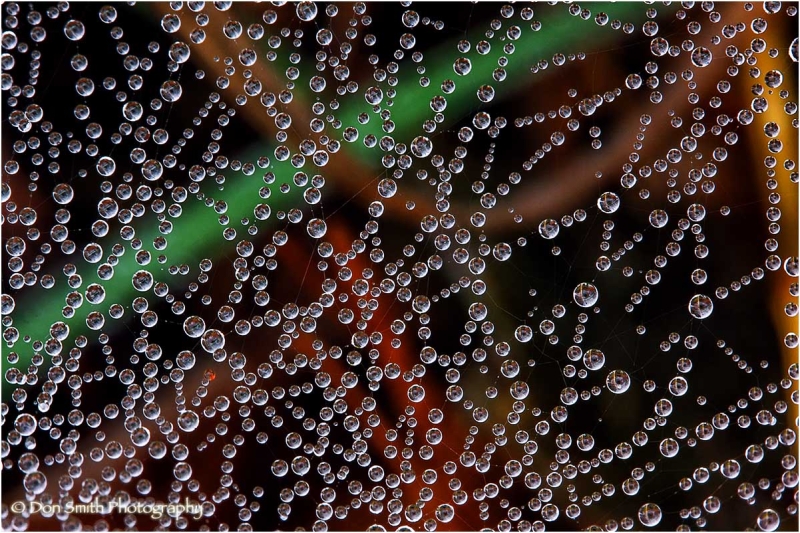 On a recent outing to Point Lobos State Reserve, I was feeling somewhat uninspired, as soft overcast light was quickly turning harsh with the approaching sun. My belief is that there are pictures to be made anywhere in nature, and part of the fun for me is in challenging myself to find them when the obvious (and the beauty of Point Lobos is very obvious) is not moving me.

An old photo saying goes: "When the sky is blank, look down." I decided to follow that mantra as I walked along one of the Reserve's southern trails past Weston Beach, and spied these innocent looking spider webs. Upon closer inspection, I realized that there were tiny dew droplets clinging to the webs, and I began to think macro.

Fortunately the air was extremely calm, but by the time I was ready to shoot, the sun had crested the hill behind this web (accounting for the highlights) and created minute thermal updrafts (due to the warming air) which caused the web to bob and weave ever so slightly.

I had just photographed an interior commercial shoot the day prior, and had my camera's ISO set high to 1250. Knowing that I could deal with the noise issues in post, I decided to leave it be in order to get a faster shutter (1/10th of a second) in hopes of salvaging the image. Fortunately it worked, and I removed what little noise was present with Nik Dfine 2.0.

This image is approximately a 2-inch section of the web (the web itself was circular and was no more than 5-inches in diameter). I used a Canon 100 mmL macro with a 36 mm extension tube at f/16 (because the web was not on a flat plane), and tried to time my exposures between the web's movement.

@Lambspun: You are definitely i the Holiday spirit!

@Gary Hart: Thanks Gary, I hope yo and your family have a great Holiday season, and enjoy Colorado - I'll be looking for some images!

You nailed it! I think I need to get an extension tube for my Tamron 90mm macro. This is a wonderful shot and makes me want to look into the Nik noise reduction software. I am jealous! Wanna a photo like yours, Don! Just great!

@Barbara: Thank you Barbara. Check into the Kenko extension tubes. They come in a set of three: (36 mm, 20 mm, and 12 mm), they retail for about $153 at B&H. As for the Nik products, I can't say enough good things except they work, and they are extremely user friendly. This is a great time of year for macro. I generally like working in the early morning hours because the air is calm. Once you get close to sunrise, the air begins to warm and the breezes begin.

@Joan Felix: I'd better Joan, it's how I make my living.

@Christine Lavanchy: Thank you Christine, and thanks for joining in.

Wow! The details in those dews are just amazing. I wouldn't mind keeping my eyes so close to the monitor just to see it! Nice capture Don!

@Fred: Thanks as always Fred, your kind comments make my morning brighter.

@Dimitrios: Thanks Dimitrios. I hope you and your family are well. Please say hello to Eleftheria and Evi. I am sorry I have been lax on writing, this has been an extremely busy month for me, and on top of it, I am trying to write a new book. Happy Holidays!

@Ralph Jones: Thanks Ralph, I hope all is well with you.

This looks like mother natures jewelery!! Wonderful macro and perfect clarity on the water droplets!

@Scott F. Schilling: Thanks Scott, and thanks for offering once again to drive yesterday. Wasn't quite what we were after, but was fun nonetheless!

You have captured the water droplets very nicely.

@john4jack: I would consider these jewels priceless!

Great effect, the blur on the web made it vanish but the drops remain, suspended. Nice.

@Self-Indulgence: Some of that "blur" was due to the fact that the web has a somewhat conical shape and was not in a flat plane. I was amazed at how much actually remained in focus!

These are the jewels of the universe, and you have brought them to us so lovingly. Superb !

@Dulcie: There just seems to be an entirely different universe from the one we "see" on a daily basis. I guess you could cal it a "world inside our world."

Very cool macro. I'm very curious to see the a high resolution version of this so I could zoom and see the spider web reflection in of the moisture drops.

@Yonatan: That would be getting very close,; interesting thought though. I'll go back a take a look.

Simply amazing!I am speechless at the beauty of the picture.Congratulations

whoa! this is just stunning! at first i was wondering what it is - and even though these could be drops on a window and then i read your explanation... amazing work!

@DarkElf: It took me getting as close as two feet with my naked eye before I could even see that there was dew on this web. Imagine the spider's view of this world!

This is an amaizing "drop" composition. The drops are so perfect that look like small diamonds, and the clors and backlight are superb

@Vitor Martins: Yes, I wasn't quite sure at first if the background grasses would add or deter from the overall image. I would have liked them a bit softer and less obtrusive, but overall, I do not consider them a detriment to this image.