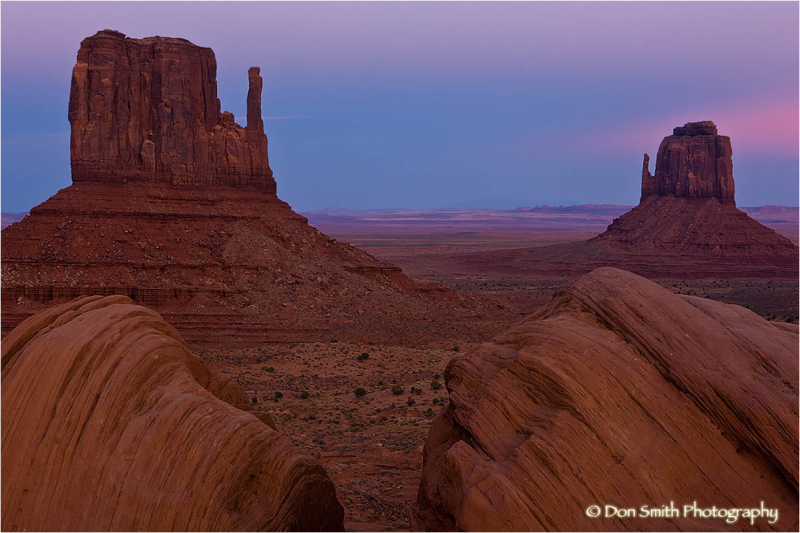 One stop along the way was at Monument Valley, a definite iconic slice of Americana. A new Navajo-run hotel, The View, now sits atop the canyon rim and affords its guests this iconic scene of the famed Mittens. Along the east end of the parking area is also a viewing spot that includes desert foreground elements, which can be incorporated into the frame.

These two large sandstone boulders provided a foreground that has been used in thousands of images, though my recollection of these being the specific boulders did not come to me until I had played with various compositions for at least 30 minutes under sunset light. Finally, a couple iconic images made by Ansel Adams and Galen Rowell flooded my conscious, and I realized I was standing at the exact spot where these two legends captured their images.

Somewhat dismayed that I may simply be repeating their success's, I nonetheless pushed on with my own visual pursuit as the light became increasingly softer after the sun had set. The striated etchings on these rocks are really what caught my eye and I liked the way they moved the eye towards the Mittens. Each boulder's markings pointed towards the monolith at the opposite side of the frame (creating two implied diagonal lines) and thus forming an imaginary X-line which serves to tie the four elements together in a tight bond. I decided to try compressing the boulders with the 1,000-foot monoliths by using my 70-200 mmL lens at f/16. Careful hyperfocal focus was needed for all the elements to be sharp, thus I bracketed my focus. The subtle twilight pinks in the sky balanced the red of the rocks and the blue portion of the sky lent for some visual tension.

Time for a quick vent at the risk of upsetting some of my readers. I know this is Navajo Reservation land. But commercialism is alive and well at Monument Valley (as well as in Page, Arizona) and the tribal council regulates when and where tourists can be at any given time. We paid to take the 17-mile scenic loop through arguably some of the most impressive scenery in the country. But we were also told (in a very condescending manner) to be out by dark (no elaboration as to sunset, dusk, or pitch blackness). We were however approached by various Navajo guides all willing to take us to our desired destinations for a price. The Federal Government has no control over this National Treasure. What can be done? Nothing. We must live with the Navajo regulations as they are (or pay handsomely to break the rules).

I processed the RAW and made some localized corrections with Nik' new Viveza 2 software. There is a new structure slider that allowed me to bring out the texture of the foreground rocks. Viveza 2 will be available next month and I highly encourage you to give it a try. Please use my code (located below) to save 15% off your order!

Don, this is probably one of my favorite locations that I have visited in the last few years! You have made a fantastic composition and I like the overall clarity of the image - very nice work with the zoom lens to get the sharpness on the foreground rocks and in the distance - not an easy thing to do with a 70-200mm. When I was there it was so crowded at this location with photographers that I put on a zoom lens and tried to just focus on minimal elements - people were climbing on those rocks and/or around them. It is a difficult but iconic location. I did pay for a guide due to the fact that I was there for 1.5 days. It was an incredible experience to go out in the early morning and at night - although as you say - the Navajo Nation has learned well the meaning of capitalism! I am hoping to go back this coming summer!

@Scott F. Schilling: I have seen many of your images that you created at Monument Valley and they are all incredible. I will go back also - probably during the monsoon season in August/September. I can only imagine how crowded this overlook would be during the summer months. It is too bad that it is so tightly controlled; nonetheless, we must play by their rules. This valley really needs a National Park designation and be run as such.

Impressive composition on the rocks. The lines really do work in leading the eyes. The colors are at the right saturation to give that natural feeling. It's very rare that I see landscapes shot with a 70-200mm lens. I'm having a hard time using my Nikon 55-200 already. Haha! Another fine job Don!

@Fred: Thanks Fred, I worked these rocks for a good 40 minutes. The problem with the wide-angle on this scene was that a dirt road below (part of the scenic loop) kept creeping into the frame. I don't mind including roads if they serve a purpose in the frame, but this road did nothing but distract. The beauty of a telephoto is its ability to isolate and compress. I just kept moving around until the road was eliminated from my view and then set about the task of properly focusing both the foreground boulders and the mittens using hyperfocal distance (my actual focus point wasn't on any of the four main elements, but rather past the foreground boulders).

Wow, again a breathtaking landscape ! Everything in this photo is perfect !!! 5 stars :)

@Tamara: Thank you Tamara - your comments are much appreciated.

Great color and detail in this magical place. I concur with Tamara 5 stars.

@Ralph Jones: It is a magical place Ralph (and thanks for the high praise), but it really needs to be controlled better than it is. Let's not get into the whole debate about how we took this land from the Indians in the first place. They have it - they own it - it just needs better management. As I said in the body of my text, this is a National Treasure and should be treated as such. Along the scenic loop drive were many shanty-type jewelry and trinket stands, an ugly distraction to a beautiful location.

This a superb photo and composition. The colors and sharpness/clarity are amaizing. Really nice, I´d love to be in this place.

@Vitor Martins: Believe it or not Vitor, this was my first visit. If you plan a trip, combine it with sites from northern Arizona and southern Utah - endless landscapes of breathtaking beauty will await you.

This photo took my breath away.....completely amazing! I felt like I was standing there looking at the real place. Your photos are incredible!

@Lambspun: Thanks Sandy, BTW - the first filter any serious landscape photographer should own is a polarizer. Also, look into quality split neutral density filters from Singh-Ray.

It brings back unforgettable memories Don. I was there some 30 years ago.

I am impressed! Very nice landscape and colors!

If only my brain would retain all that you share, Don ... you are very generous in your writings and teach us so much about light, composition and all that goes into creating a magical photograph.

@Judy: Thank you Judy, I have mentioned this on my blog before, my teaching is a way of paying back all my mentors over the years. Knowledge should be shared and there should be no secrets in photography. My hopes is that those benefitting from this would pass it on to someone else trying to learn the craft.

I've seen a lot of pix on the subject but here ? Wow-geez-OMG ! Superb on colors, compo, frame and much more : the atmosphere of a whole world you offer in a single image.... Bow !

@k@: Thanks you so much Karine, that is very high praise for a single image but very much appreciated.

the composition here is what makes this shot - every rock formation with its textures forms a perfect piece of the puzzle... the ones in the foreground get the viewer in and sort of open up for the wider "classic" view of this place to take over... it is never easy taking photos of well known location and following in the footsteps of great photographers but you have put your perspective through here! i enjoy it even more so as these are places that i do not know if i will ever be able to visit...

@DarkElf: I will generally research an area thoroughly prior to photographing it. Because this visit came on the heels of my Arches/Canyonlands workshop, I really had no time. I remember falling asleep the night before after reading a bit about the area, but I really had no previsualized images in my mind. Perhaps this was a good thing as here I was in the exact spot where the classics had be captured and not even realizing it until much time had past. Sometimes ignorance is bliss!

I don't know if I can add anything that hasn't already been said, Don- this is spectacular! (I would expect nothing less!) Interesting thoughts about the area, and the need for it to be better managed. I have never been there, but hope to go soon- before it is no longer a wild area. Hopefully it will remain as unspoiled as possible, and we all have a part to play in that! :)

@Tracy: I agree Tracy. I guess I am not as upset at the stewardship of the Navajo Nation as I am about the way it is being managed (and this was just my impression from my 5 hour visit). Yet to me, this area just begs for National Park status and management. Say what you will about our government, but our parks system is top notch in my opinion and I hate to see any land prostituted for the sake of a dollar.

I love your open spirited sharing ... you are a blessing to us; I hope to get to where I have something to share also! ♥

@Judy: You probably already have more to share than you realize Judy; remember, there are people who will perhaps pick up a camera for the first time today with no idea about a shutter setting or an f/stop let alone anything vision or light related! Any tidbit at that stage of development would help. I meet them all the time on my travels.

The textures and colors are wonderful.

What a magic place , your shot is stunning !

I'm happy to meet you on Aminus, I can travel with your captivant coverage !
This shot make me dream more than you can think ! Hope that a day I could travel also on this place.. :-)
Thank you for this pleasant moment ! :-)