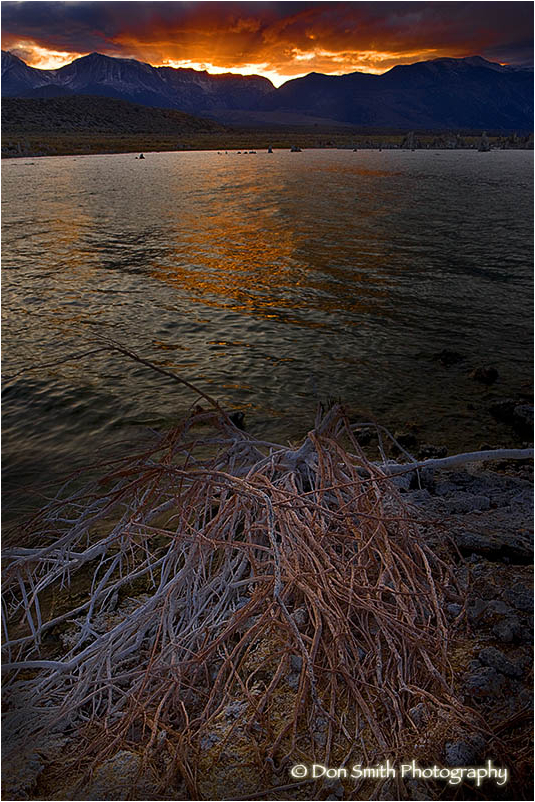 An alkali-covered snag adds an eerie foreground to a fiery sunset sky along the south banks of Mono Lake near Lee Vining, California. I wanted to create a sense of depth with my image and use the blood-red sky as a background. Tufa towers are the logical foreground choice for this area and the main reason photographers from around the world travel to this destination. But I have been photographing here for the past 30 years and wanted something a bit different, thus began my search for a foreground element other than the calcified limestone towers.

It didn't take me long to discover this seemingly petrified snag which had washed-up along the banks thanks to the high winds from the previous weekend's storm. Its white, ghostly appearance is due to the high alkaline level which makes this inland lake three times saltier than ocean water. Because the lake has no outlet, it is naturally saline. An estimated 280 million tons of solids are dissolved within the lake and periodic eruptions of volcanic ash have also added considerably to Mono's chemical mix. The pH of Mono Lake is approximately 10 (this measure of alkalinity is roughly equivalent to household glass cleaner).

As for the composition, I opted for a vertical take on this scene from a low perspective. I purposely allowed the snag to occupy 1/3 of the frame and used the lake with the cloud's warm reflection to serve as another plane to lead the eye back to the Sierra crest and finally the lit clouds. In retrospect, I probably could have shortened the amount of lake by changing my angle to the snag, but as the saying goes: "hindsight is 20-20!

I focused 1/3 into the plane of the frame at f/16 to allow for the sharpest depth-of-field. This image is a combination of four frames bracketed by one-stop with my shutter and combined in Photoshop CS4 utilizing masks and layers. I had to select one frame only for the lake as there was a stiff wind creating too much movement to allow for a blend. Fortunately, the clouds were holding fairly steady.

Great capture - I love the reflection in the water!

@Ana Lúcia: Thanks Ana, I appreciate your comments.

@john4jack: Good morning Jack, I know tufa towers are the logical choice, but after so many visits, it forces one to find something new. Thanks for sharing your thoughts.

So much going for this and it's all about the light! I love how the branches are lit up in the foreground and the sky in the background and we have something so beautiful to see it reflect off of in between!!

@Lambspun: I think what you wrote is a great lesson for those new to landscape photography. It is, first and foremost, all about the light. But to just capture great light can still lead to a weak image. Strong compositions lead to strong images; add a dose of quality light, and viola - an image worth viewing!

This has incredible God Rays and color at the top and then as you say - an eerie snag - has a lot of visual interest at the bottom of the frame! I like the color reflection across the water that ties the bottom and the top of the frame together! Wonderful light and color in this one!

@Scott F. Schilling: Thanks Scott, and again, congratulations on getting the podcast up and running. I encourage all my viewers to click on Scott's name (above) and sit back and listen to our fun trip to Yosemite, Kings Canyon, and Sequoia National Parks. Scott, Mike Hall, and I offer tips to help improve your landscape photography. Scott did an incredible job editing down 4 days worth of conversation into an enjoyable podcast!

Wow! wonderful rays of light at the top, and this is such an interesting snag- so many little lines ans shapes to follow! I like the way the orange reflection on the water helps lead my eye to the background, too. And of course, the light in your photographs is always beautiful!

@Tracy: Thanks Tracy, I always appreciate hearing from you. Gary and I are leaving in about an hour for my Arches/Canyonlands workshop. We are driving and are hoping to make St George / Cedar City by tonight.

the vertical perspective works well here i think - the shot builds up nicely from an interesting foreground, through the reflection on the water and towards the explosion of light and colours at the top - it all looks superb!

awesome. i don't know why,
but it *feels* so cold there.
and beautiful. i love especially
the gold in the foreground.

@Seraphine: Hi Seraphine, I really can't remember if it was cold or not (probably a bit as it was windy). This area is a wonderful experience and only a 4 1/2 hour drive for you when Tioga Pass (Hwy 120) is open.

Beautiful. Great DOF and the light coming fro the top of the mountain give the photo a great strong.