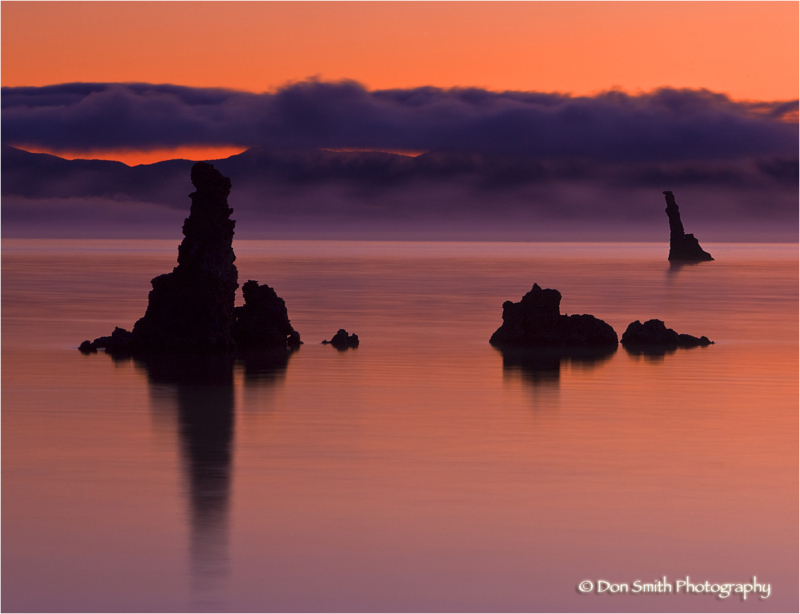 The real variable in all this is the weather. Clouds and mist, as we were presented on this particular morning, can transform a familiar scene and take it to new heights. As I was pulling into the parking area in near darkness on this chilly fall morning, I saw this cloud hovering all by itself over the lakebed towards the east (where the sun would be rising). I've seen similar clouds in the past, but generally they are hanging along the mountain ridge, but this one was different.

As I made my way to the lake, I noticed mist was starting to rise off the lakebed and my pulse quickened (who said you need caffeine to get going in the morning)? Because it was the height of the fall color season, there were already workshop groups set up in my favorite locations, so I took a portion of my group (I was assisting Gary Hart's eastern Sierra workshop) to a new spot. The idea was to work with the wonderful color, cloud, and mist. The tufa towers would have to be silhouetted and serve as graphic elements and add visual weight to the image. Thanks to the presence of the mist, it allowed for separation between the towers and the mountains. On clear days, I've always had trouble with losing the silhouetted towers into the dark mountain range, so the mist provided an unexpected bonus. This image was captured about 30 minutes prior to sunrise. It was my second frame of the morning and perhaps my best.

I admit, I struggled a bit in finding the correct composition, not in the left to right placement of the tufa towers, but in the top to bottom placement. The foreground tufas actually split the horizon and all the visual weight is in the upper half of the image. However, this is one of those images where I just forgot about the rules (they drive me nuts anyway) and just tried to feel the composition. In the end analysis, this image just felt right to me, it felt balanced. The more I cropped off the bottom of the frame, the more out of balance it felt. Perhaps it is the shadow line of the left hand tufa that holds the bottom half of the image, or the rich saturated color reflecting off the water. Or perhaps the shadow of the reflected tufa allows this symmetrical composition work. Tough to articulate this one - I would love to hear your thoughts.

About five minutes after capturing this frame, a handful of photographers showed up and started bemoaning the fact that there was nothing to shoot. Our group confidently smiled knowing we already had our image captured. As the old saying goes: "The early bird..."

Wow! Great perspective and depth, I am amazed...

@Ana Lúcia: Thanks Ana, the mist is what is really allowing for the depth in this image. As I noted in the narrative, without it, the tufa towers would be lost against the dark mountain range, similar to photographing a dark-haired person against a black background. The mist is what allows for the separation and was the reason I was so excited about capturing this frame!

This looks like a mistic magic place (Neverending Story). Superb.

Beautiful and dreamy image. It doesn't matter how many millions of times this has been photographed, I never get tired of the beauty of nature.. Your photo is Excellent. Thanks for sharing.

@Sarito: Thanks Sarito, I believe that when photographing places that are "common' to us, we should strive to find something new to capture, be it a different angle, perspective, time-of-day, etc. With this image, it was all about taking advantage of the cloud and mist (and the beautiful early morning light). Thanks for your comments.

To me this is beautifully balanced Don! I think that the dark weight of the towers really grounds the bottom 2/3 of the image against the top, saturated sky... and the cloud line really makes the shapes pop. I am happy that you left the reflection of the closest tower there too- I personally like lots of negative space in an image like this! This does have a symmetrical feeling to me, even though it is composed in an asymmetrical way- The larger foreground tufa is nicely balanced by the two other tufa, and the fact that there is no detail, and they are silhouetted makes for nice repeating pattern. I notice how they are at just about the same height at the tops, and they mirror each other in shape.
I also took a piece of plain paper and held it over this image on my screen and traced the main elements- This allowed me to visualize only the shapes and arrangement of them in the frame...
This is what came out to me: I drew a line at the water, and another at the division of clouds & sky. the I circled the three main tufa towers. When I take the paper away from the screen and look at it by itself I see what looks to be a musical score- The large note (tower) on the left is visually balanced by the two smaller ones on the left, their placement in the frame is asymmetrical, and creates a nice pattern.
I could probably go on, because there is really a lot happening in this deceptively simple photograph!
This is a wonderful lesson for all of us who are learning about composition and how the elements work together to made an interesting and memorable (and beautiful!) photograph....Thanks!

@Tracy: That is really an interesting and insightful analysis of this image Tracy, My assertion that it is symmetrical comes from the fact that if one was to draw a line under the foreground tufas, it would split the frame. Contained within the bottom half of the frame is simply the left hand tufa's shadow, and the negative space you refer to, though it is colorful and the color holds visual weight. Your analysis of the tufas as musical notes is also very interesting and something I did not see. I did crop a fourth tufa out of the frame, (and counted the middle two as one) in order to leave the silhouetted forms as an odd number. Psychologically this creates visual tension as our rectangular frame is comprised of two sets of equal lines, and by using an odd set of objects, I believe breaks this static pairing. Thanks for your insightful analysis of this image and for your continued support!

Beautiful image Don! I think Tracy's analysis is very good. Another thing that I see is at the bottom of the image you have a color transition from the orange around the tufa to a purple color at the very bottom. I think this transition creates another layer within the image.

@Brent Fraser: Hi Brent, nice to hear from you and I hope you are doing well. I think Tracy did an excellent analysis of the image and opened my eyes to something I did not see. You are opening my eyes to something else (the color transition). I guess I became so focused on the upper half o the image, I missed everything that was happening in the lower half - and both of you are doing a great job of articulating why the image felt balanced to me - thanks!

Don this is amazing. I just love the purple orange contrast. i haven't seen these two colours together in the sky before.
I also agree with Tracy's analysis. The image is wonderfully balanced, at least for a non expert like me!

@Elora: Thanks Elora, confirmation number three! This is what I love about a community like Aminus3, we can all share ideas and help each other grow as photographers. The fact that I make a living at this does not mean I have all the answers. All of you have helped me in understanding this image at a deeper level and I appreciate your help!

Wonderful composition, colors, and stillness. Love that calm it evokes. Love the analysis that Tracy made, and your response, too. Amazing how much I can learn by reading and viewing the photo blogs. Thank you.

Although I can't articulate it nearly as well as some of the other viewers, I like the decisions you made in composing this shot. I never would have picked up the necessity of the mist to bring out the tufas and I appreciate the image even more with this in mind. This is a very similar concept to that used in plain film radiology like a chest xray. The reason we are able to see the heart in a chest film is because of differing densities. The heart's muscle is much denser than the air inside the lungs, and thus we can see the heart!

I'm curious to find out if you used a polarizing filter for this shot to deal with the water or if it was not necessary since the sun had not yet risen.

@Yonatan: Hi Yonatan, I did use a polarizer (I have one on all my lenses virtually all the time) but I don't recall it doing much as I was shooting towards the light. Polarizers work best when one's position is off-axis to the sun. Polarizers do make subtle improvements when the sun has not yet risen and even after it has set, but again, it is based on your angle to the the sun's path. One of the key things a polarizer does is cut reflections which allows the image to have a more saturated appearance.

Well Don, I am going to pass on to Tracy for the detailed analysis! Especially since she is working on getting her degree and I will have to be calling her regularly for advice!

I just like it! There are 3 tufa - not 2 or 4 - a perfect photographic number - those 3 elements anchor the photo for me and they also provide perspective - my eye works from the left large one and then on to the middle and right one - very nice! I also think the last right hand Tufa draws me to the clouds which I am always drawn to anyways - great colors with the mix of cool blues and warm reds! It is very nice to see something that I haven't really seen before in this location - we do see hundreds and even thousands of images from this location - very creative and thoughtful work - as always!

@Scott F. Schilling: Thanks Scott, I agree with your comments about Tracy's analysis, she opened my eyes to some aspects of the image I had not really thought about. Same with Brent's reply. I think it is great that we are all thinking about images at a deeper level. There has to be a visceral response to what we are photographing, but it is great when we can understand the conviction of our emotional response. I knew I liked the balance of this image, but it was bugging me that I couldn't fully explain it, even though I broke some "rules!"

superb clarity and sharpness! that clean feel to the shot emphasises the purity and silence in this scene! perfectly calm and relaxing mood and wonderful colours! the third rock in the far distance really gives a great idea of the distance and DOF in this photo - it is still perfectly sharp!

Fairy atmosphere..
The dream continue for me...
What about fantastic traval in your photoblog... !