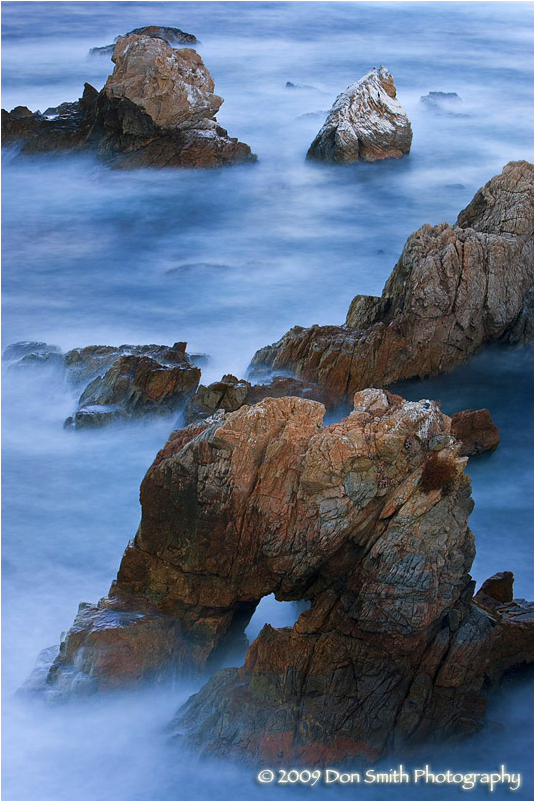 I was working with a student on a private lesson and headed to this location near Sobranes Point prior to sunrise. Under the early light of dawn, I decided to play with dragging my shutter with the help of a Singh-Ray 8-stop variable neutral density filter. Because the sky was void of clouds, I cropped it out all together and concentrated on placing the frame around just the arch and some neighboring rocks.

The filter allowed me to shoot at 30 seconds at f/16 and combined with the ferocity of the surf, produce this almost feathery-like effect. I cooled the water off a bit in Adobe Camera Raw by moving the temperature slider to the left. then brought back the warm color in the arch and rocks with the help of Nik Viveza (an incredible piece of software).

The image is stunning !!

Oh, how beautiful, but teaching us to expect nothing less from you.

Here, this one is for you!

@Judy: Excellent shot of the moon Judy, and with a point-and-shoot no less!

Stunning image Don, like the texture of the foreground rocks , great colors!

Superb. Are we in the air, is it a cloudscape ? By a seaside ? We don't know from here (and my screen)... and is it really important in fact... ? just behold this fantastic panorama... Again, bravo Don.

Terrific aperture/shutter speed combo for that lovely water effect. I love the muted colors. In my experience, all of Nik's plug-ins are excellent. I generally use their plug-ins in PS rather than LR because of Layers and being able to use Blending Modes and different degrees of Opacity. In my color work, I use Tonal Contrast a lot, but I almost always back it off in varying degrees once it has been globally applied.

@john4jack: I agree with you Jack that Nik has produced an excellent set of plug-ins. They are intuitive and easy to use, and they work!

Awesome shot - I like the long exposure on this!

@Scott F. Schilling: Hey Scott, hope your moon shot worked out. We were in the Whites last night - it was pretty incredible! Hope to have the image up by next weekend. Have fun in Hawaii and we'll hook up when you get home.

How incredible.....rock arches in the boiling ocean cauldron! Impressive shot!

Very effective, and visually stimulating to see this place under such extreme conditions.

I Love the misty quality of this! it almost looks like mountain peaks rising from the clouds.... I am loving the NIK software I just got! It is so easy to work with, and fun, too :)

@Tracy: Thanks Tracy, Nik software is incredible and easy to use. Glad you are starting to work with it.

wonderfully dreamy and almost surreal quality to this photo! wonderfully exposed to have the effect of rock literally floating over the water...

pretty nice. what's the white stuff on the rocks? Looks like snow.