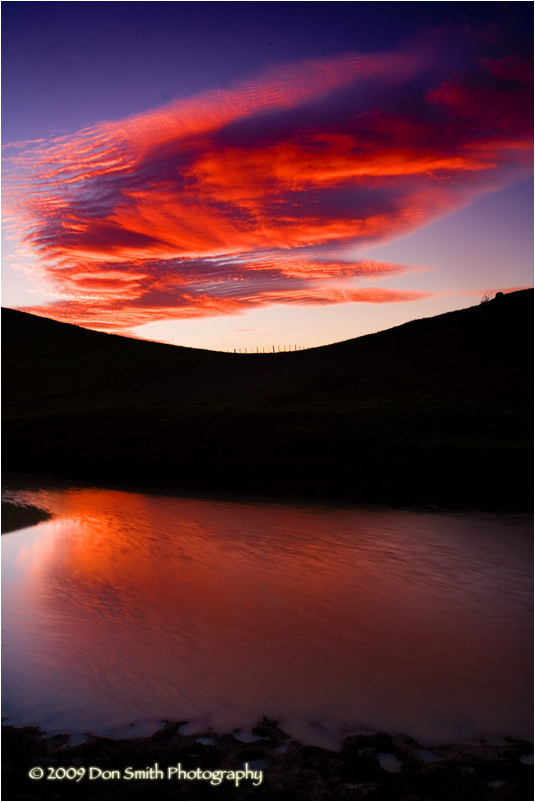 I often tell my workshop students that I really don't go out to photograph subjects. They generally look at me with a quizzical look until I explain that I go out looking for quality light and color. Once I find the combination of the two, I scramble to find something to use that works with the light.

Such was the case on this morning as I started driving about an hour before sunrise on some of the country roads near my home. I first spotted this cloud hanging overhead and saw that I had a clear sky to the eastern horizon. Now the game was on. I knew once the sun got near the horizon, the underside of this cloud had a great chance of being bathed with warm light.

I continued driving and searching the gradually emerging landscape and about drove off the road when I rounded a turn and spotted this small collection pond. I frantically pulled the car over, put a 24-70 mmL lens on my full frame camera and composed this frame.

Once the anticipated light arrived, I was rewarded with not only a beautifully lit cloud, but also an awesome reflection. I used a Singh-Ray 3-stop soft edge split neutral density filter to balance the cloud and reflection. I try to keep my reflections about a stop less than the lit cloud to keep things looking natural. The light was fleeting and I may have had about three minutes of intense light at best.

This formula of finding quality light and color, then subject, has served me well over the years. Photography is really all about light, and if I was to have shot this simple composition at say 3 pm in the afternoon, most people would not look twice. But ordinary scenes can look extraordinary under quality light, one just needs to take the time to look.

Beautiful. In fact this is a superb work of color and light.

Searching for light ... a wonderful lesson!
Glad you drive off into a ditch! :D

wow sir! another amazing landscape!as i would i have expected! excellent!

Stunning color! That would have left me so speechless I would have forgotten to snap the shutter. :)

@Barbara Kile: Sometimes magical moments just happen in nature. I'm just glad I was present when the magic arrived at this location.

Wonderful shot, Don... and an interesting and informative real-world narrative to accompany and explain it! Seeing the potential and watching it come to fruition is great fun... nice job imparting the how-to of both. Thanks for sharing your terrific picture and a little of your vast experience!

@Tony Duque: Thanks for taking the time to write Tony. Hope you come back.

Whoa! Awesome! Those are the first two words that popped into my head when I saw this....You bring up a really great point about photography being all about the light- As a "new" photographer, I often get stuck on subject first, then try to anticipate, or wait out the light...I like the thought of working it the other way around! (Thanks for the star trail info, too!)

@Tracy: Hi Tracy, just got into my hotel in Bishop and was out shooting moonlit tufa at Mono Lake tonight. Hope the information on the exposures for shooting stars helps - remember - it is just a starting point. Good luck and have fun!

Don, absolutely fantastic - just 15 minutes from your house - wonderful light! This is the most beautiful cow pond photo I have ever seen! I like the fence in the distance also - I hope you're having a great week - it is dang cold this morning!

@Scott F. Schilling: HI Scott, Gary, Mike and I headed to North Lake this morning (elevation 10,000 feet), snow everywhere. Tioga Pass is closed as is Hwy 108. Mike is trying to get home today.