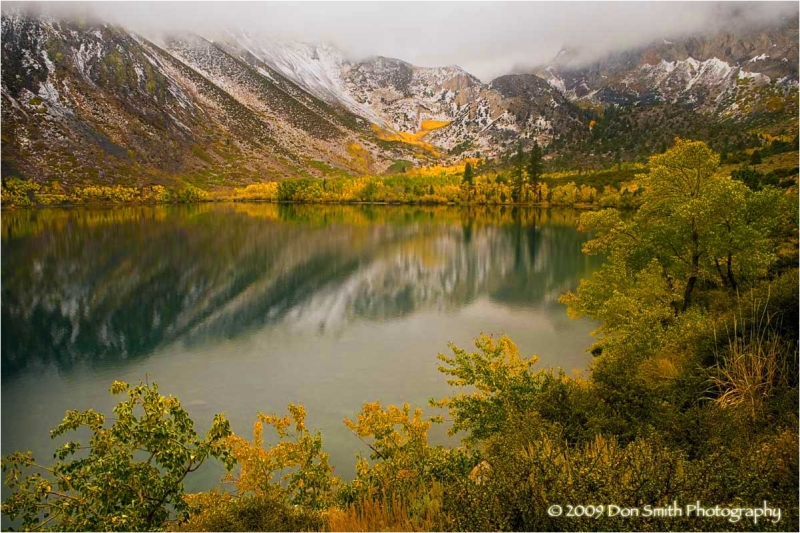 Change of Season at Convict Lake

I love this time of year. The days are still warm, but the night air has a tinge of chill to it. It also signals the start of fall color here in California's eastern Sierra range.

One of my favorite places (and there are many) that I love visiting and photographing is Convict Lake which is located about 8.5 miles south of Mammoth Lakes off Highway 395. The lake itself is not large (0.9 miles long by 0.4 miles wide) but it is set at 7,850 feet in the Sherwin Range of the Sierra Nevada. What makes it special for me is the dramatic rise of Mt. Morrison which seemingly pitches straight up to an elevation of 12,241 feet (most of the peak is obscured by the clouds in this frame).

Back in 1871, a group of convicts escaped from prison in Carson City. A posse, led by Sheriff Robert Morrison, had a shootout with the convicts at the back end of this lake. Morrison was killed in the escalation but the convicts were eventually re-captured. Mount Morrison was named in his honor.

During early October, the aspens at the south end of the lake turn vivid yellow turning this area into a photographer's dream. I captured this image on a stock shooting trip with some friends in October, 2006. We awoke to find ourselves in the midst of the season's first snow storm. I remember being giddy with excitement as I felt I would have the opportunity to juxtapose two season's in one frame - a true rarity! The beauty of an overcast and stormy sky is it allows a photographer to shoot the entire day (which is exactly what we did). This image was captured around 2:30 pm. The storm was beginning to break and the clouds were starting to lift and unveiled this incredibly beautiful scene.

I will be leaving Friday to assist Gary Hart in his eastern Sierra workshop starting Sunday. It would be awesome to get a repeat performance with the snow, but the beauty of fall in the eastern Sierra is worth it even without the white stuff.

Beautiful photo. I love the environment and the fact that through the reflection of water we can see beyond the top of the photograph/frame.

@zOOm: The forecast was for a "slight chance" of snow during the night. We ended up getting about 3 inches!

@Betsy Barron: Thanks for joining in Betsy, and thanks for your comments.

I can almost hear your shouts of glee upon awakening and finding it had snowed. What a gorgeous scene you captured!
Are you camping when you go out on these shooting trips, Don, or is there 'civilization' somewhere nearby?

@Judy: We were staying at "Graceland!" Actually, it was a cheesy double-wide trailer behind a hotel (I'll swear Elvis stayed there. So I guess you can say it was somewhat civilized.

The low clouds, the color, and reflections all make this a wonderful image. The composition is great and makes me want to stay and sit a spell!

Fantastic shot Don and with the snow it is awesome! It is awesome with the clouds that you can shoot this at 2:30 pm! A great day for sure! I hope all went well last night and have a great week coming up!

@Scott F. Schilling: Hi Scott, We shot for 2 1/2 hours last night but got some of the subtropical clouds drifting through the frames. The biggest problem was that the half-moon was throwing far more light than I realized (my bad calculations). We'll see how things turn out. It was more of the process that I was after and the remote timer worked great.

The shot is awsome !!! Thanks for the explanations , very interesting ;)

I like how you have autumn in the bottom of the image and winter at the top...

@Larry Bliss: For one to get the opportunity to juxtapose two season's into one image is indeed a rarity, by also a pleasant surprise. Thanks for joining in.

This is such a classic beauty! Not many people get excited about "bad" weather, but I can imagine how happy you were to see the snow! I love the fall colors and the reflections; but I REALLY love the way the dusting of snow brings out the textures and shapes of the mountains. Perfection in my book!

@Tracy: I believe that when weather is at its worst comes the opportunity for great landscape photography. When most people head indoors, that is the sign you should be heading out.

Beautiful capture. Convict Lake never looked so good to me. This is a great seasonal shot.

Hi Don! I hope you have better luck than I did last week. I stopped in here and there was little color and clear blue skies. Good Luck!

@Brent Fraser: Thanks Brent, it sounds obvious that you were at least a week ahead of the color, and when accompanied by blank-blue skies, it doesn't bode well for photography. Not sure if you are aware, but there is a website where people write in daily giving fall color updates. Just Google: Carol Leigh Fall Color.

What a dream indeed! So incredible with the colors of fall and the veil of white snow....winter :) Awesome shot.

Lara from Vienna via Bucharest, Austria

I am too far away to take part in those workshops, but I would very much like too... The photo is amazing! The colours, the textures...

Thank you so much Lara, and thanks for joining in on my blog. If you ever do plan a trip to the western United states let us know, we would love to have yo join us, we meet many wonderful people.

how gorgeous!!! your photography is amazing!

This is the perfect illustration of the other side I've just explain to you...Don, I think that you have to be a little a magician...
Another magical image expressing the magical of the Nature....