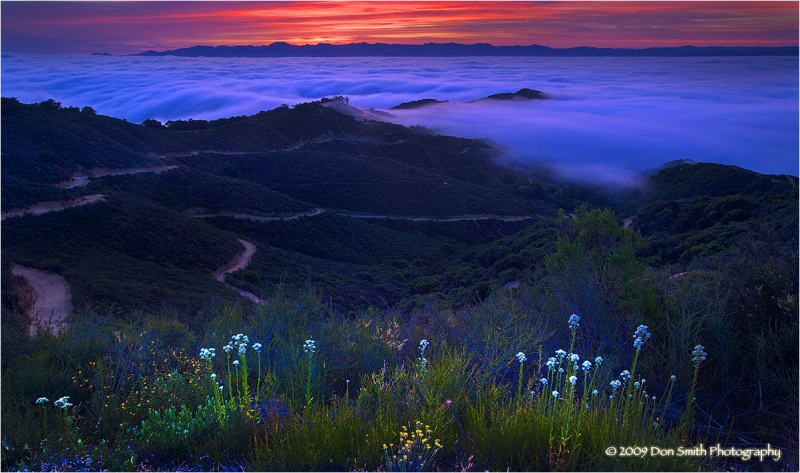 One of his contentions he made which I could relate to was that we will often times put more credence towards an image that was difficult to capture (i.e. having hiked 20 miles to find the image versus one shot 5 feet from our car). Cramer concluded that perhaps our best images are not what we as photographers think are the best; but rather, what elicits a strong emotional bond with our viewer, the one who is willing to part ways with their hard-earned money to own one of our prints.

Today's image is one of those which I personally like but am not so sure if others feel as strongly about it. And no, I did not have to hike 20 miles to capture it. I actually found this scene on one of my "get in the car and drive" mornings that I often like doing. I live in a rural setting in southern Santa Clara Valley (48 miles south of San Jose) and can be in the country literally within minutes.

On this particular summer morning, I left my house in the dark and drove up San Juan Canyon Road towards Fremont Peak State Park. I left with the usual summer fog hovering over me, but soon burst through the mist after climbing past 2,000 feet in elevation. What I didn't know was that the typical clear sky above the fog was now veiled with thin stratus clouds. My adrenaline began to pump as I envisioned the potential for a blazing sky above the cool fog - a scenario that usually equates to a interesting image. I had about 20 minutes before the sun would hit the horizon of the Diablo Mountains in the distance.

Personally, I love this feeling of playing "beat the clock." Perhaps it stems from my background as a sports photographer, but nonetheless, it forces me to concentrate and "find the picture." Obviously the first choice is perspective, both in terms of lens choice and my position to the scene. This sky and the sea of fog lying below me begged for a wide angle view, thus I attached my 16-35mmL lens and began moving around to find my frame. It wasn't hard to utilize the lines of the dirt roads (part of Hollister Hills motorcycle park) to help in drawing the eye through the mid-portion of the frame, but what I lacked was a strong foreground, without one I was afraid I wouldn't adequately portray the depth of the scene.

The sun was rapidly approaching and I was nearing frantic mode and literally running up the road in search of something (anything) to use as a foreground. Then it was as if Mother Nature smiled and said, "enough fool - here you go," and I was presented with this beautiful patch of summer wildflowers. There was no way to frame them from top to bottom as they were growing through a barren patch of dirt, so I cropped them about half way up. I used a very low perspective (camera about 16 inches off the ground) and took a meter reading at f/20 (I mistakenly thought I was at f/22) to hold depth-of-field. Remember this was still roughly 10 minutes prior to sunrise and at this small of f/stop, quite dark. My exposure called for 20 seconds at f/20 at ISO 400. I knocked this exposure down one stop (10 seconds at f/20) because I felt the flowers would look more natural and not dominate the scene at that exposure. Fortunately there was not a breath of wind present which eliminated any problems of shooting at this long of shutter speed.

The next step was to calculate the exposure on the ever-brightening sky. I simply pointed the camera at the sky, took a reading, and and saw it read 5 stops brighter. Fortunately I own the Singh-Ray 5-stop soft edge split neutral density filter (but could have bracketed exposures if I didn't). A couple of test frames to adjust the filter (I hand hold) and I captured my frame.

I hate apologizing for anything in my images, but these wildflowers are very sharp in the original capture. Aminus3's aggressive compression (and yes I do pay for the high quality) renders them somewhat soft (at least that is the only explanation I can offer). If any of you have a work-around on these detail-oriented images I'd love to hear from you. Jason, If you happen to be reading this, please let me know what I can do.

UPDATE - If you look at this image now, you will see the wildflowers appear sharp! Here was my problem and it may be affecting your images. I originally sized all my images at 800 pixels and turned-on Aminus3's auto border which causes the image to be down-sized a bit and causes a loss of sharpness. Thanks to Jason Kravitz checking into the problem, he had me re-size the image at 1200 pixel and it made a world of difference regardless if the auto-border was activated. If you still want to upload 800 pixel images, then I would suggest turning off the auto border.

I love the lighting on your foreground flowers and being above the fog and clouds is awesome! What a vantage point to capture the sunrise!

Thanks for such a detailed explanation. The shot is fantastic as always.

Beautifulthis sea of fog, makes our imaginary work. The colors are great and as well as the DOF. In the North of Portugal ( I live in the Center) in January/February there is also the possibilty to find a landscape like this one in the morning. I catch there a few images last year. I have posted one in my blog.

@Vitor Martins: Hi Vitor, this scene is fairly predictable during our summer months as this is a coastal valley and this is fog which has rolled in off the Pacific Ocean. What wasn't predictable were the clouds, remnants I assume from some tropical moisture that moved up from the Gulf of Mexico.

Absolutely lovely Don. I just love this fog, and the colours too! It's a shame about the flowers though, but I am sure they were fantastic!

@Elora: I'd really like to know if I am the only one who experiences this problem of areas of my images not revealing the original sharpness? It is not present in all images and that is the real head-scratcher.

Exquisite. The sky and the fog are marvelous. But it is the foreground that really grabbed me. Reading your commentary, I don't know what to do with some of the digital display problems. Two things help me here. First, with landscapes, and especially wide landscapes, I tend to move back a bit; just as I would at an exhibit. And second, and this is more important for me, it is the print that I really care about.

@john4jack: Both valid points Jack, but if one pays Aminus3 for the "quality uploads," why aren't we getting it? Check this image again and you will see an unevenness in the focus on the flowers. The middle yellow flowers are razor sharp as well as the well as the flowers to the far left of the frame and the far right, while everything else drifts towards soft focus. This is annoying when I know the original is sharp - it looks sloppy. I've talked with other photographers on this site who have experienced similar scenarios.

The biggest plus of your commentary, Don, is that I at least realize that what I am seeing in Lightroom is right on, and that the problem is with Am3. A number of people on Am3 have separate websites to which they refer people if they want to see an accurate rendering of their photographs. I'm with you in not understanding why they can't fix the problem. What many of us have experienced is not an aberration.

@john4jack: Hi Jack, Thanks to Jason's efforts, we have gotten to the bottom of the problem. I had been sizing my images at 800 pixels at 72 dpi and turning-on the auto-border (set at 1 pt). He had me turn that off then re-upload the image and it made a huge improvement. Then he suggested I try resizing the original TIFF down to 1200 pixels at 72 dpi and it resulted in an even better image. I then tested turning the auto-border back on and could see no difference in quality. The picture you see now is the resulting file at 1200 pixels! The flowers have regained their original sharpness. Try it and let me know what you think.

Incredibly beautiful and eerie at the same time....the group of wild flowers in the foreground with their pleasant simplicity, color, and beauty and the ominous fog covering up all things in its way. I love this photo. I could stare it this for a long time.

@Lambspun: I'm encouraged to hear your thoughts Lambspun, I have this image hanging in my home.

Don, thanks for all of the information and help! I appreciate it!! Another fantastic image also! The clarity on my screen is great - the foreground looks very nice and crisp and the colors pop! I have noticed that in our area if you can get up high and there are clouds above - the sunrise can be quite spectacular - You were very lucky to find these summer flowers! Awesome work!

@SCOTT F. SCHILLING: Thanks Scott, I know all my images moving forward will be sized at 1200 pixels. Jason e-mailed this morning saying they have added this information to the image upload section of Aminus3's site. We do live in such an incredibly beautiful area, just need to take the time to seek it out. Sounds like another heat eave heading our way - stay cool!

Wow! What a difference!

@john4jack: You've said it all. There will be a summary on my next couple of posts as I know many are struggling with this issue.

When I first looked at this beautiful capture I thought I was seeing a funny interface between ocean and land. Something, though, didn't look right. I was completely blown away to learn that I was seeing fog. Wonderfully done and thank you for the great commentary. I've found that Aminus3 is a great place to learn about the "method" from other people. Posts such as yours are inspiring.

@Yonatan: I appreciate your comments Yonatan. After spending close to 30 years in this business, I felt it was time to give back some of my knowledge I've acquired along the way. A sort of pay it forward if you know what I mean.

This is amazing... so beautiful ! Congratulations.

@Tamara: Thanks for joining in on my blog Tamara, hope to hear from you again.

This is just fantastic! I have so often liked the overall view from this road, but have passed it up because of the motorcycle roads....This has made me realize that sometimes things like that can be used to advantage.
You photography continues to blow me away, and I learn so much from your posts!

So true... what we think our best shots are, may not be what others think. But I really like this shot. It just feels like morning. I don't know how else to put it, but it just makes me feel "there." Beautifully composed, and wonderful use of the light!