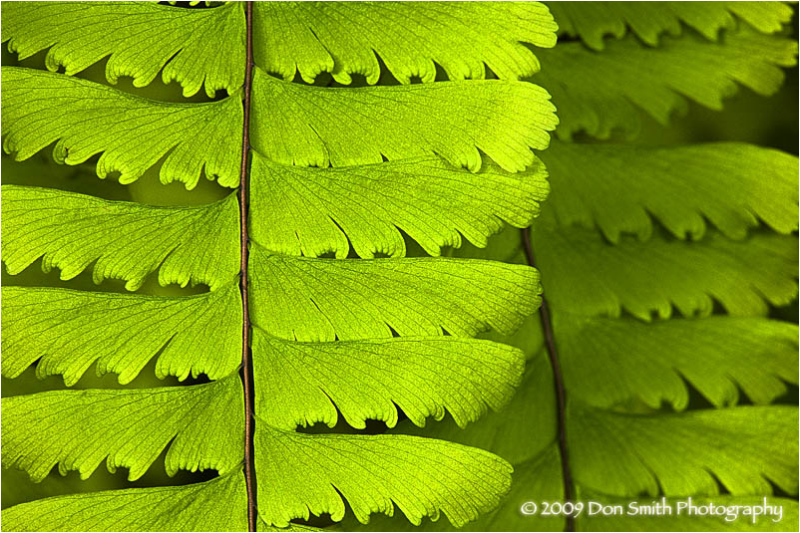 One of the areas we visited was Fern Canyon. Inauspiciously located on the coastal side of Redwoods National Park, it is not on many tourists maps, but for those interested: turn onto Davison Road off Highway 101, 2 miles north of Orick, and follow the mainly dirt road for 9 miles. You will come to a parking area where the road ends. Follow the trail north out of the parking lot for about 1/4 mile, then turn right when you reach Home Creek.

The creek winds back through the forest and has over eons carved a deep canyon (approximately 50 - 80 feet) through the sedimentary soils. Here you will discover vertical walls which spout an amazing variety of ferns (five different kinds) and other moisture-loving plants and mosses. You will feel as if you are in another world and in a sense you are, as Stephen Spielberg chose this location for a scene in Jurassic Park 2: The Lost World.

Visually the area can seem overwhelming at first glance, but with some careful inspection, the images slowly begin to emerge. For this macro image, I decided to concentrate on making a statement about this area and what it has to offer - mainly - ferns. I loved the repeating patterns but was having a tough time making logical sense with my camera and my 70-200mmL lens. Fortunately I decided to try some macro and the patterns began to reveal themselves. I used my Canon 100 mm and isolated a section of small ferns confined to an area of about 6" by 4."

I liked how the light on the foreground left hand fern was brighter than the subordinate right hand fern which was more in the shade. Clouds were drifting past and this was late in the afternoon, so everything was illuminated by indirect light. Lighter tone elements in a image stand forward while darker tone objects recede. I further enhanced this by making sure the focus was on the left hand fern. Even at f/16, when one is this close with a medium telephoto (macro range) there is no way to carry the depth-of-field throughout the entire image.

Lastly, I made sure the color green dominated the scene (which wasn't hard to do). Green is a color that symbolizes nature. It has many psychological implications including: tranquility, good luck, health, and jealousy. Green also has a calming effect and is thought to relieve stress and help heal (don't you feel better already just looking at this image)?

Lastly, and I found this interesting, green has long been a symbol of fertility and was once the preferred color of choice for wedding gowns in the 15th-century. Even today, green M & M's (an American chocolate candy) are said to send a sexual message. Hmmm, the things you learn on a photo blog!

If you would like to join Gary Hart and me next June and explore this incredible area for yourself, please check out my workshop Redwoods and Mendocino Coast Photo Workshop.

Don, I enjoyed your commentary on this image! It is interesting because the minute I viewed it, the repeated patterns gave me a soothing feeling and the symmetry does calm me down. I think I would like two prints of this - one for my office and then a very large one for my master bedroom!! Awesome work on this.

Have a great weekend!

@SCOTT F. SCHILLING: Thanks Scott, yes you have such a hyper-personality... Talk to your wife and let me know how big that print should be for the master bedroom - I'm here to help!

@Gary Hart: Thanks Gary, as you know the lens is incredibly sharp - I believe it may be the sharpest lens Canon makes.

@Evi: Thanks Evi -I hope you are your family are well.

Very nice photo, with great color and light, that gives us some tranquility. Your commentary is intersring, because I didn´t that green was connected to so many symbolisms.

@Vitor Martins: It's alright Vitor, my wife doesn't believe me either!

Mmmm green M&Ms..tasty :) I love this shot, it's nice because you can see all the detail in the fern, and it really is relaxing. Thank you for the tip, if I ever get to California, I will most definitely have to stop by!

Marvelous light. Terrific selective focus. I knew that there was a reason that I like green so much!!

@john4jack: I can see I'm bringing out the worst in everyone here - kind of like how everyone gets towards the end of one of Gary and my workshops! But then again, shouldn't we all be having fun with this? Thanks for chiming in Jack.

I find this beautiful image very tranquil and restful as well. The detail is stunning!
This place has been on my "to do" list for a couple of years- but haven't gotten there yet...(actually it is on my hiking list, and was not on my photo list) This shot may move it up the list a few notches!

@Tracy: If you visit either early or late in the day (or on an overcast day) you will be rewarded with this beautiful soft light. It is worth the effort, but keep an eye out for the resident elks - not hard to spot them as you walk down the trail.

Truly incredible color and texture in this photo! So many shades of green and this one is definitely like tuning up the saturation all by itself....the natural way.... ;)

@Lambspun: Other than a little bit of vibrance (and I do mean little), there was no saturation added. SO indeed, this was saturation courtesy of Mother Nature.

Wonderful light green! I like this natural repetition! Bravo!

@Eleftheria: Thanks Eleftheria - and congratulations on making Spotlight!