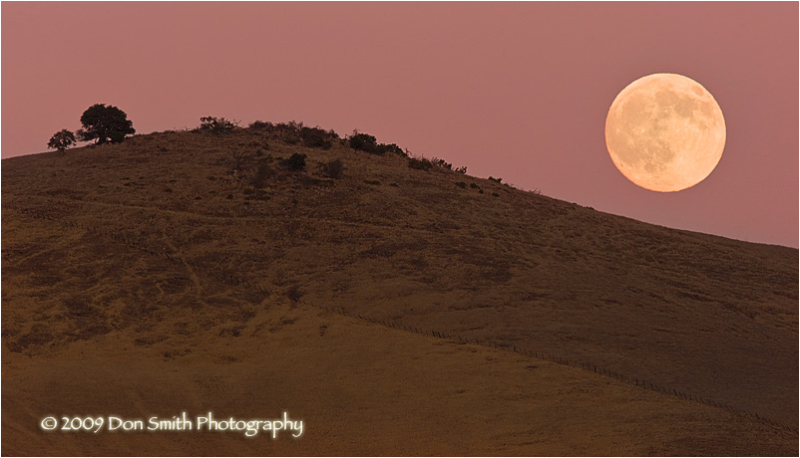 Such was the case for this image which I captured east of Hollister, California, along Quien Sabe Road in San Benito County. This particular moon started rising 30 minutes prior to posted sunset time. Because moonrise times are calculated for a flat horizon, I had to factor in the extra time needed before it would appear over the horizon. I had photographed this location before and knew it would take about 25 minutes before I would see it.

The next calculation was where the moon would rise. I used The Photographer's Ephemeris , a cool (and free) piece of software that works in conjunction with Google Earth and helps with moon and sun calculations. I also paid attention to the shadows of the trees (as the moon rises opposite the sunset) and that got me pointed in the general vicinity. I was hoping the moon would rise directly over this peak but it wasn't to be.

Nonetheless, I was happy with the image and loved the little fence line as it serves to work the eye up and through the frame. I used my Canon 400 mm f2.8L with a 1.4x converter to compress the scene.

@Vitor Martins: Thanks for your continued support Vitor.

What a gorgeous setting Don ! I wish I were there, beholding this amazing luminous moon and this crazy sky. Another one of your beautiful shot.

@zOOm: Thank you Florence, nice to hear from you and I hope all is well.

@Betsy Barron: Thanks for joining in Betsy. I've seen some images on your site - very nice work!

While your calculations weren't exactly what you hoped for, I like the balance in this composition perhaps even better than if the moon 'sat' on top of the peak.

@Judy: Sometimes we just have to change our expectations a bit. You are right, there was still an image to be made here. Thanks.

Wow, That is just amazing! The detail in the moon is wonderful! I think the composition -just as it is- is very nicely balanced :) Hmmmm... If the moon had come up right over the top of the hill, do you think you'd have shot it vertically? (just wondering)

@Tracy: I would have still had shot it horizontal, but would have used a 2x converter to get in even tighter. I like having something (trees, boulders, etc.) in front of the moon just as it peaks its head over the horizon to dispel any notions that it may have been "Photoshopped."

This couldn't have been a more perfect shot. How beautiful.....the moon's detail is just stunning!

wow very nice shot, great job, like it a lot!
greets from México!

@Abraham Siloé: Hello from California Abraham. Glad you found my blog and I hope to hear from your again.

Nice work Don and I like the color tone of the sky as the sun has just set! Great work on this!

@Elora: Thanks Elora, the reason the moon looks so big on the horizon is because our brain uses depth clues from the surrounding visual elements - this is called the Ponzo illusion.