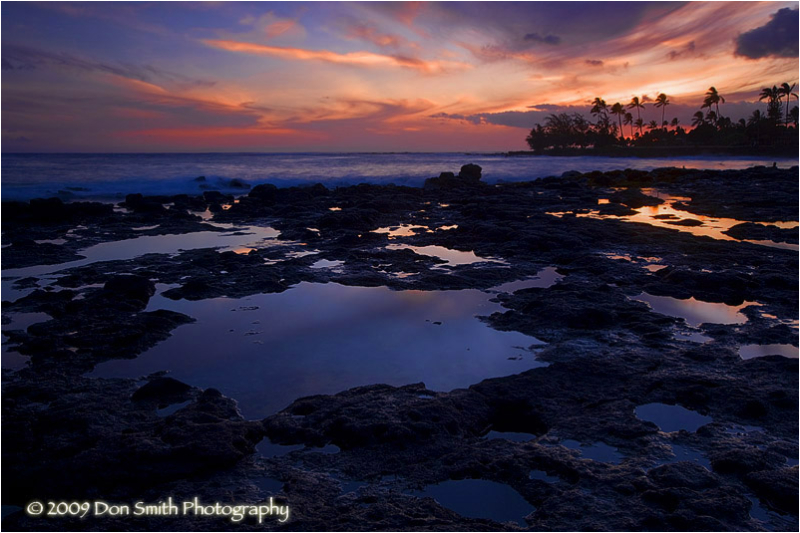 Sometimes life's little annoyances turn out to be a good thing. I arrived at this location an hour prior to the posted sunset time and began composing images in my mind (and trying to anticipate the light). I initially thought about climbing down onto these lava pools but wasn't convinced it would work (plus the tide was moving in). Thus I opted to begin my shoot further back with a medium telephoto alongside a road, and shoot just a bit of the ocean and make the palm trees (in the upper right of the frame) my main subject by silhouetting them against the sunset sky.

Just as the sun began to set on the horizon, two young girls decided to jump in front of me and view the sunset from this vantage point - they were dead center in my frame! I just didn't have the heart to tell them to move, so I figured, "why not join them?"

I replaced my 70-200mmL with my 16-35mmL and quickly discovered that the pools were reflecting the dusk light. With my heart rate quickening, I frantically composed various scenes, then finally settled on this composition, and with the help of my Singh-Ray 3-stop soft-edge split neutral density filter, captured my image.

Oftentimes the best laid plans go awry right at the critical time. After I captured this image, the girls' father came over and apologized for them getting in my way. I told him not to worry about it, that it was not a big deal. Upon reflection, their innocent actions forced me out of my comfort zone at a critical juncture with the light. By staying calm, and accepting that fact that I did not own this beach, nor this view, I was able to make an image I really liked. As a bonus, some of my earlier frames from my other location proved to be good images also.

I've seen too many times where photographers yell and scream as if they own the real estate. Had another photographer jumped in my frame (and not a couple of 7-year-olds) I may have said something, but in this case, I'm glad I kept my big mouth shut. Nature is for all to enjoy on whatever level one chooses. Just because I decide to photograph it does not mean everyone else has to stay away, and remember, most people have no idea what you are seeing through the camera.

@Stefan: Color is everywhere on both ends of the day (assuming it is not raining). It is very seductive and I had to remind myself to shoot something other than just pretty clouds. I've always loved reflections.

Colors are just surreal Don ! Sunset lights just radiates the picture, even to the reflect on the right side.

@zOOm: This is why it is hard to second-guess Mother Nature. I did not believe the tide would hold off like it did. I had thought this entire shelf would have been under water at the golden hour, but alas, I was proved wrong!

Nice photo, colors and ambience are great. I like a lot the reflections on the water and the depth of the field.

@Vitor Martins: It was a surprise to me also Vitor, but a pleasant one indeed.

Nice place, nice picture. I hope to visit there someday.

@Hiro: We met some young couples from Japan, seems like a popular destination for newlyweds.

Now that is a nice set of tide pools Don! The sky and reflection colors are wonderful in this image and the composition is fantastic! Have a great Sunday morning!

So true, and love the reflections and composition.

Hi Don, I just had a tour of your portfolio and I've been impressed by the quality of your landscapes. Congratulations !!

@Jeremie: Thanks Jeremie, hope you return on a regular basis.

This is just a gorgeous shot! I especially love the reflections of the sky in the pools- I think it helps bring out the texture and shapes of the rock.
I can really relate to the rest of the story, too.
Good advice!

@Tracy: Good morning Tracy, if this would have been one of those "once-in-a-lifetime" shots, I would have tried to get them to move, but how often does that happen? I just think most photographers get too overly protective of their space and can turn into major jerks trying to protect it.

Terrific piece of work Don, worth testing the patience for.

Gorgeous shot. You are a great photographer and also a very nice person. Thanks for the advice.

@Hema Iyer: Thank you Hema, I'm sure I've done my share of yelling and screaming in the past but all it tends to do is make me more uptight and then I don't enjoy the experience of capturing the image, somehow it loses its luster if you know what I mean. This image will mean more to me because I got to share the experience with two inquisitive 7-year-olds!

Don Smith...I want to be just like you someday... You are Ansel Adams in Color... I truly love your work! Just simply Marvelous!

@Miss Ruthie: Wow Ruthie, that is quite a compliment and I thank you from the bottom of my heart. I have been truly blessed to have made my living for the past 30 years with my camera. My only advice is to just stay true to photographing what moves you, I say it on this blog all the time, if an image touches you, chances are good it will touch someone else.

@Eleftheria: You would love this little island Eleftheria. Everywhere you look there is beauty. I am finally getting settled back here in California and we have returned to a remodeled home, so we have been busy unpacking boxes and getting things back in order. I hope your summer has been a good one. My oldest son Rob just started high school yesterday! He came home with a smile on his face, son that tells me he enjoyed his first day.

Ahhhhhh, we spent three nights on Poipu Beach enjoying the peace and quiet there. This is such a beautiful image of that special place. I like that your gentleness took over and you let the little girls be just what they were, little girls. The bonus was a wonderfully reflective image ... and an appreciative father.

@Judy: I guess a age has a way of mellowing all of us. The very first time I visitied Kauai (27 years ago), most of the Poipu area was sugar cane fields. Oh haw things have changed.