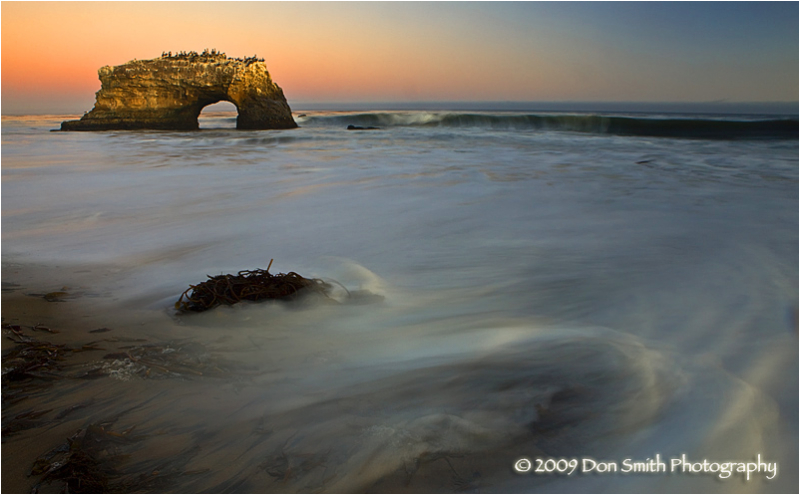 Living near the coast affords me the opportunity to photograph many of nature's creations. For some innate reason, I'm seemingly drawn to natural arches and sea caves. Today's image is one such arch that has been on my "to do" list for quite some time. This is the last of what was once three naturally formed arches at Natural Bridges State Park in Santa Cruz, California.

In the early 1900's, the three arches carved by nature out of a mudstone cliff inspired the Park's name. The arches were formed millions of years ago when water, silt, and clay sediment combined with one-celled marine plants called diatoms. Heat and pressure solidified the mixture into a soft stone that formed the three arches.

Wave action against the soft rock formed the bridges and also undercut them, eventually wearing away and leaving only islands. The outermost arch fell in the early part of the 20th century and the inner arch broke during a storm in 1980. Only the middle arch (pictured here) remains, but it is also being slowly eroded by waves.

Trying to capture an image which depicts the arch in an aesthetically pleasing appearance was the true challenge. Fortunately the weather cooperated as much of the coast was shrouded in a thick blanket of fog. Santa Cruz is known for having a stretch of beach which can remain in sunshine, and this evening proved true. There was some nice wave action which would move clumps of kelp in and out of the foreground. This got to be somewhat frustrating as portions of my foreground would wash away prior to me capturing the image.

Instead of "Bulls-eyeing" the arch, I purposely moved it to the top left quadrant of my image to make it less of the "main subject" and more of a supportive element to the overall frame. The ball of kelp serves as an anchor point; I then simply played with various shutter speeds to get some "painterly motion" with the surf. I settled on this frame because I liked the implied diagonal line starting with the swirl in the water on the bottom right of the frame (which also mimics the shape of the kelp and the arch), and continues by drawing the eye towards the arch.

The blurred water starting at the bottom left of the frame also creates a secondary line back towards the ocean and the incoming wave serves to tie the two together. Opposing lines often create dynamic tension in an image, which can make the image seem a bit "edgy." I liked the edgy feel of this image juxtaposed with the soothing feel created by the twilight colors. Warm dusk light (from the twilight wedge) and soft blues from the water worked well to accomplish this goal.

The scenery is amazing, especially the "natural bridge"! The rising sun makes this photo perfect.

@Marilla: Thanks Marilla, sad to think that the bridge is the last of three and is slowly eroding with time.

Perfect and so so beautiful. Loved the way you gave the description.

@Sakshi: Hi Sakshi, I was talking to a photographer friend the other day and we were recounting that many of our best images seem to happen before and after the sun is actually in the sky. Much of it has to do with the softness and manageable contrast range of the light. Thanks for your kind words.

@Eleftheria: Thanks Evi and Eleftheria. While we were photographing this scene, we had two young girls (oblivious to what we were doing) come splashing through the waves. Fortunately we were patient and they eventually moved on. I hope all of you are doing well and enjoying your summer.

Awesome! One of my favorite places....This turned out just perfectly- I love the movement in the water, and the kelp in the foreground really breaks up the expanse of water and gives my eye a place to go to on my way to the arch. Beautifully done!

@Tracy: I appreciate it Tracy, the funny thing (looking back) was that I would be working on a composition with kelp in the foreground, then a wave would come in and wash it away! I'm sure you know what I mean. This was also the first time I had ever shot Natural Bridges - I want to go back in the fall when the Monarch Butterflies are in. Take care.

Great shot, Don, but how was Eddie Money? :)

@Gary Hart: Hey Gary, we ended up listening to "Two Ticket to Paradise" as we were walking out of a restaurant on the wharf! The traffic was a nightmare, our planned parking lot was full, and we were hungry. A sure sign we are getting older!!! But we had fun on the shoot; Mike almost lost his camera/tripod to a wave - was a pretty funny sight. Fortunately everything survived and Mike ended up with wet shoes/pants.

Awesome effect on this one. I like it very much. Congratulations!

@Nomad Flavor: Hi Nomad, visual motion can play a key role in the success of an image, it can also give the image a greater feel. Thanks for sharing your comments.

Don, very nice work on this image - I really like your foreground elements and the shutter speed you used - I feel like I am standing there with the water going around my legs! The wave in the background adds a very nice final detail to the image with the arch and color to the left! Great shot!

@Scott Schilling: Thanks Scott. We are currently at the airport in Honolulu waiting for our flight to Kauai. Hope you are having fun with you son!

This is really thrilling Don... I can't imagine how many years, centuries, this arch has seen the back and forth of the ocean... endlessly sculpting the rocks... until one day it will disappear log time after us probably... I love this "creamy", "milky" sea somehow... a very brilliant picture with perfect crop, focus and exposure. You're definitely the best Don, and I can see and feel how much and deep these landscapes inspire you and how much you love it. It's simply visible here.

@zOOm: Thanks Florence, I always appreciate your kind thoughts.