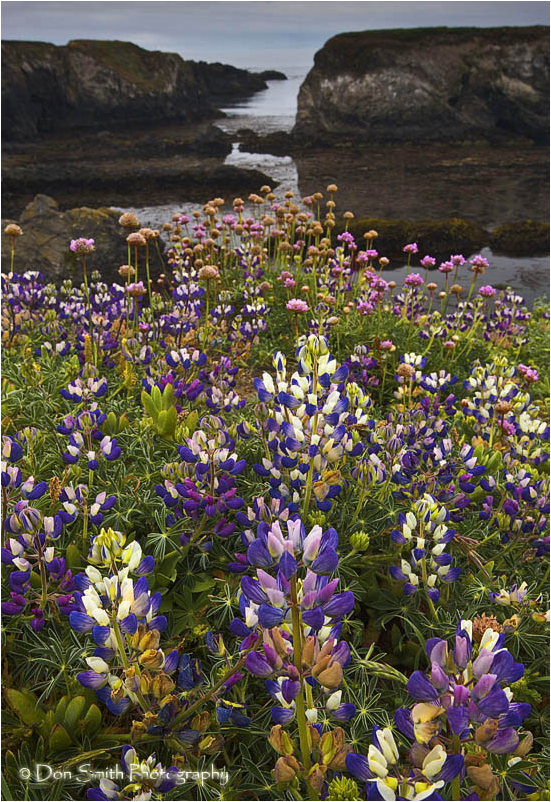 Summer wildflowers make their annual June appearance along the Mendocino headlands with a mix of colorful lupine.

When our group arrived at the headlands shortly after 6 am, I told the participants to just wander around and see what potential images they could find. I feel part of being an effective workshop leader is knowing when to allow students to apply what they have learned without constant mentoring - give them some time to explore and just be photographers.

Thus my assistant Gary Hart and I each went separate directions making sure we were within earshot should we be called upon for some assistance. The morning sky was overcast and the air was perfectly still - a green light opportunity to capture these beautiful wildflowers. With essentially no limiting factors (no wind and the overcast sky allowing for even exposure) I just wandered the bluffs looking for something that caught my attention.

It was simply a matter of playing with compositions and perspective. When shooting a carpet of wildflowers, I personally like to get very low and allow for the flowers to fill the bottom 1/3 - 2/3 of my frame. I used my 16-35mmL lens at f/22 for maximum depth-of-field, but realized I could not hold focus all the way from foreground to background as I was but mere inches from the foreground flowers. There was really nothing in the background that needed to be in sharp focus, so I was content on making the foreground flowers as sharp as possible.

I used a Singh-Ray 2-stop split neutral density filter to hold down the sky, and then took it down another stop in Adobe Camera Raw with the grad filter which was added in the CS4 version. I did a slight curves adjustment to bump contrast as the soft light rendered the image a touch flat.

@zOOm: Thanks Florence, I love shooting wildflowers at first light because the ground has not yet started heating, thus the air is extremely calm. Even the slightest draft can make flower photography an exercise in frustration. I tried shooting some beautiful salsifies last night with a macro, but they were just slightly bobbing and weaving - I had to time my rather lengthy exposures!

Beautiful shot. I expected to see a meadow not the ocean behind! Great surprise!

@Sarah: Hello Sarah, I can only imagine the Alps full of flowers right now - on my list of places to visit!

This is so quiet and peaceful, Don. I love the stillness this evokes- and it is amazing to see such a great carpet of lupine right by the bluffs!

@Tracy: Hi Tracy, we certainly don't see lupines like this on the central coast, but I was in Big Sur yesterday teaching a private lesson and the color was absolutely vibrant - definitely worth a trip to Garrapata (check out the bluffs near Sobranes).

Wow, wonderful result! Love the "lots of wildflowers" up close filling most of the frame. Nice job.

@LauraS: Thanks Laura, this was a very nice year for wildflowers - not sure if all the late rain had something to do with it, or not, but they were certainly in abundance.

I just love the contrast of the bright foreground and they grey background. It's wonderful!

@Elora: Hi Elora, I really feel when the scene is mono-toned, such as this morning when the coastal fog was present, it's imperative to add some color to the scene for balance.

Thank you, Don, there's a lesson with each and every photo.
This is exquisite!

@Judy: Thanks Judy, I'm glad these postings are helping.

Wow...now those are some Lupins....compared to our Lupins here in Maine...which are beautiful....those are HUGE!! AND beautiful. I have never seen them that big. What a lovely photo. And I am glad you did keep a close up on some of those wildflowers so I could see the difference.

Don I love this low perspective it makes me feel like I am right there and I think it makes the colors pop even more! The clarity is perfect on these! A nice contrast between the color and the cold fog - have a great weekend coming up. Looks dry in mountains over weekend into early next week I will monitor