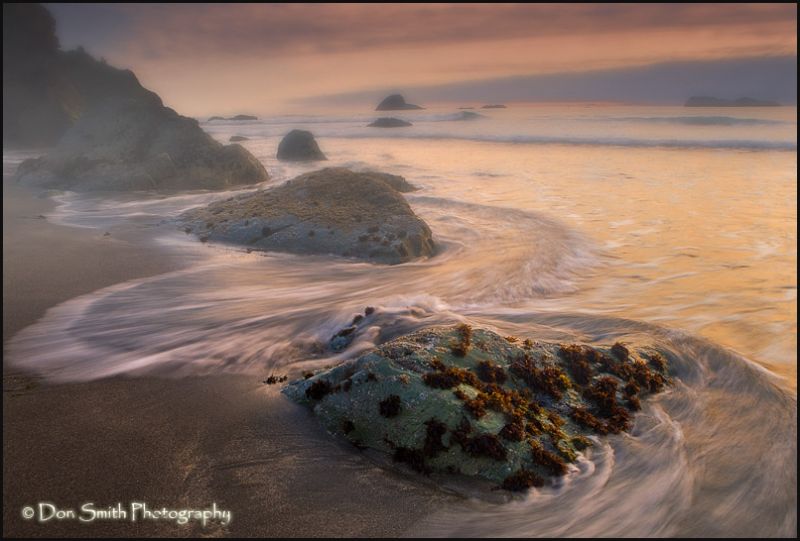 While scouting Trinidad State Beach the evening before the start of my Redwoods/Mendocino workshop last week in northern California, I came across this seemingly innocent stretch of rocks. While trying to compose images that are not evident to my eye (how often does this happen to you?), I try to break the scene down to shapes and lines. The shapes were obvious but the lines at first were not. Shapes and lines (all elements) must work in harmony for an image to be successful.

I liked whatever it was that was growing on the foreground rock - let's call it kelp? This became my foreground element. I am rather tall at 6' 2" and could still not see the finished composition from my perspective, so I decided to try a lower perspective and things became clearer for me. The implied line between the first three rocks created a natural diagonal which served to pull my eye through the frame.

At the third and largest rock, the lines tend to branch off as if creating a "Y," thus taking the eye up and through the horizon which I minimized. I did take a bit of "creative license" by adding a bit of mist with the fog filter from Nik's Color Efex Pro software. I generally do not add elements to my image that were not present, but in this case, there was some mist on the horizon and I simply enhanced it.

All that was left was to play with wave patterns as they gently brushed the shore. A rather slow 1/5th shutter allowed for just the right motion I was looking for. I did use a polarizer to bring out the subtle color in the scene.

Changing perspective is one of the easiest (and often most overlooked) tasks a photographer can do when trying to find potential compositions. Trust your instinct (that inner tug that alerts you to a potential image) and if you cannot at first find the image, keep moving.

Lovely shot, I really like the ebb and flow of swirls with the water around the rocks, and the mist trick you did is great. An undualating shot, and works very well.

Wow Don, this is another fantastic shot! I wish I lived in California so I could come to some of your workshops! I think I could learn so much!

@Elora: Hi Elora, thanks for the nice comments. Perhaps a trip to the US is in the cards? We'd love to have you come out for a workshop. I am expanding my workshop listings to the western United States.

Great lesson, Don! I love this. The light on the foreground rock is incredible, and I love the soft mist. Beautifully done!

@Tracy: Thanks Tracy, as I stated in my explanation, I felt the Nik filter "enhanced" what was already there, I don't make it a practice to add elements to the scene which were not present.

Gorgeous scene Don! Thank you for the lesson on perspective too...You are so right about it!

Brilliant scene ! These colors are breathtaking !

Dear Don, I love the lower point of view on this image - as you mentioned the rocks give some perspective that pulls me through the image - the other thing that my eye always catches is the wonderful s curves that nature can create - this has some great curves with the flow of the water - shutter speed is perfect and the clarity on this foreground rock is wonderful as well - I like the feeling of the fog too! I am on the road for volleyball doing sports shots the next few days! Have a great weekend. The trigger is in the mail and should be here any second.

@Scott Schilling: Thanks Scott, enjoy your son's volleyball. I'm keeping my eye on the weather - things are starting to heat up!

This shot is wonderful because not only do the rocks work together to make the line you wrote about, but the waves breaking around each rock also sets it off as a separate element. A very artistic image, congratulations.