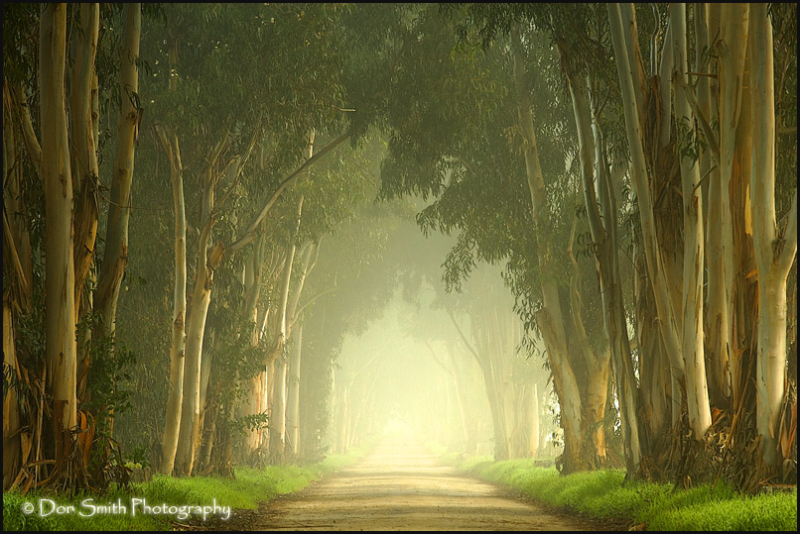 I first saw the potential for this image on a family outing to a Christmas tree farm which is located near the end of this road near my home in San Benito County. My wife Beri noted how this eucalyptus-lined lane would make for an interesting photo. I envisioned the finished image as something a bit more mysterious and told her it need some low lying fog.

A couple months later my wish came true as I awoke to find some soupy looking fog near my home. This lane is about an 8 mile drive from my house and about half way there, the fog began to dissipate. Feeling somewhat discouraged, I nonetheless decided to push on and see what would happen. About a mile from this scene, I was surprised to see a dense pocket of fog still in tact. I quickly sped towards this site and hopped out of the car with my camera already on the tripod with a 70-200mm lens to help compress the trees. I had envisioned a low perspective and immediately set up the tripod about 2 feet off the ground.

Just as I was about to click the shutter, I spotted some headlights in the distance slowly heading my way. My patience was running thin but I had no other option but to wait and hope the fog would hold. Off to my right I could see the sun was beginning to make its presence and it would be just a matter of minutes before this mist would vanish. What seemed like an eternity had passed when finally out of the soup appeared an old Cadillac driven by an even older woman whose head barely appeared over the steering wheel. She pulled up next to me, gave me a quizzical look and then drove on. I immediately dropped back down to my knees, re-composed, then shot three frames before the beautiful mist vanished!

This image has become one of my best-selling stock photos. Recently it was sold by Getty Images to an Italian advertising agency and will be featured in an advertisement to be displayed in all of Italy's airport terminals.

HI Don, I can see why this would be one of your best selling. This is stunning, the patience you needed to capture this was well worth it. Stunning, breathtaking image. I love the Eucolyptus trees lining this country lane.

A truly beautiful shot. Has a very fairy tale essence about it!

@Sarah: Never thought of it that way Sarah, but I can see youur point. Thank you

@ManuelaR: Thank you Manuela. Glad to hear from you.

Absolutely stunning.........no wonder it's selling, and congratulations on the Italian sale! I hope you get the royalties on that one, or does Getty them all? :(
Thanks for explaining your setup process.

@Judy: Thanks Judy, Getty gets a good chunk of change, but then so do I, and without them making the sale, it would all be a moot point.

Am I in a fairy world ? It's great Don, really fantastic ! And congratulations !

I love the depth of the trees. They are inviting you deeper into the path. Great Shot!

@Annette: Thank you Annette, thanks for joining in.

Absolutely stunning, Don. Fraught with mystery. It looks like how people describe a "near death" experience; going into the Light. The detail of the trees is superb.

@john4jack: Wow - all this symbolism is scary!!! Actually, it is cool to hear other's take on this image, glad you like it Jack. I'm in Moab currently and the wind is howling outside. Perhaps a chance for some rain/snow and even thunderstorms later today - I'll keep my fingers crossed.

What a fantastic atmosphere you had here! I like fog!

@Eleftheria: Whe I see fog, I grab my gear and head out - and I am rarely disappointed. Hope you are doing well.

Well Don seems your patience and conceptualizing has paid off handsomely:) Deservedly so as this truly is an image that took my breath away!

@Pavan Kaul: Thanks Pavan, I think we all need to pay attention to potential scenes near to where we live, who would know better than us?

this is so very wonderful and magical. jim

@jim: Thanks Jim, hope you are doing well.

Oh, if I could only imitate you well enough, Don. What a gorgeous capture !!
But I will use your tips; telephoto lens to compress distant objects and a low perspective in certain situations.

And by the way, would you donate some of your time and expertise in the critique forum? Your advice in landscapes and other topics would be invaluable. We're trying to make the critique forum busy, informative and fun so, having somebody like you in there would be just awesome !!!

Your response sounds like classic Moab April weather to me. Have a great time.

Hi Roman, perhaps this summer when my schedule lightens a bit I'll take a peak - thanks for the offer. I am busy with personal travel and spring workshops for the next two months. PS - you don't need to imitate, just follow your own instincts and note what grabs your attention. There is no substitute for just getting out there and doing it!

What a fantastic story to go with a beautiful image! I love the golden tones that are present in the foreground trees. "Edge of the fog" light is my favorite kind!

Just perfect! I love the compression of the trees with the long lens. And I like the balance of the fog with the light that's starting to filter through. Your work paid off! It really has a magical feel to it. I guess it's a good thing the little old lady didn't stop to chat for a few minutes! :)

Dear Don, I hope you are doing well and if the clouds passed your way from the CA area yesterday you may have some beautiful skies today! This is one of my favorite photos - i remember asking you about this - another example of how things so close to home can turn out just incredible! Congratulations on this being used for a major ad! That is great - have a wonderful rest of the week!

WOW! I have seen other photos of eucalyptus trees in the fog but this is the best ever! What a mood you created with this absolutely phenomenal light and composition. Can I say it again. WOW!!!

What an awesome shot...looks to belong in a fairy tale book. NICE!!! :)

Any photographer worth their salt will have experienced just such a story. Patience is built as a nature photographer. Well done, Don.

Thanks everyone for your nice thoughts. Unfortunately the personal reply link is broken again, anyone else experiencing this problem? It was fixed for a couple days, now it isn't working. I'm currently in Moab, Utah, photographing Canyonlands and Arches National Parks. We had some wild weather yesterday but today is very nice.

So peaceful... Beautiful shot, which brings wish to visit this place - and not every image does that.

@Sergei Z: Thanks Sergei, I appreciate your kind words.

Great capture. I just went through your webiste and I must say I am really impressed. Congratulations for your work and thanks for all the input that you are providing to the AM3 community. Cheers :) Ah, about the reply link I'm having no problem whatsoever.

@xavier cardell: Thank you Xavier, and thanks to all the supportive Aminus3 members for their input - it's been fun! BTW, I switched my browser to Firefox (was IE v8), problem solved!

Magical image! I love the accompanying story as well. The low perspective, light on the trees, and fog come together beautifully. I am beginning to understand that landscape photography is regularly filled with these fleeting opportunities for THE shot and the stress that accompanies these opportunities I find exhilarating. Thank you for sharing the story and congratulations on the advertisement!

@Yonatan: I wouldn't call it stress, it's more like an adrenaline rush. When all the elements come together and one is ready and in position to capture them is what makes landscape photography fun. If one doesn't have the passion, what's the point?

I feel like I'm about to step into fairyland..... Magnificent! Congratulations! I am not surprised it is your best seller!

A really lovely image, the light is fantastic