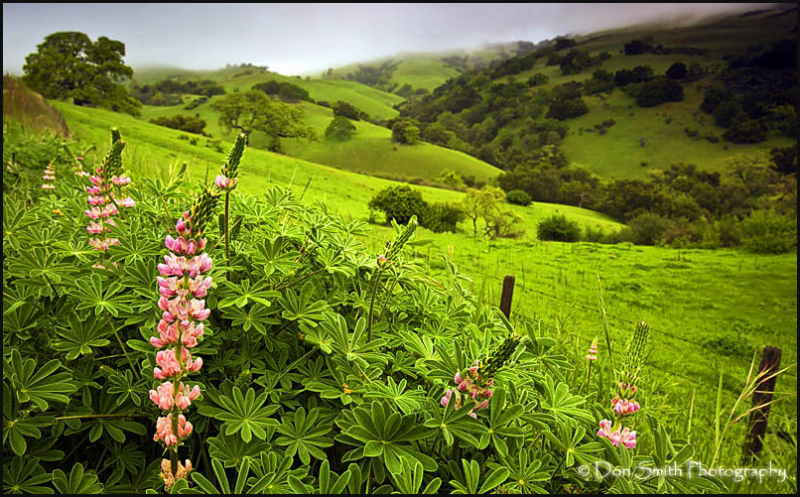 I love making images in the fog. Living in close proximity to the Pacific Ocean, morning fog tends to make its presence more and more as the summer months approach. Recently I awoke to a calm, foggy morning, a green-light situation for photos. Galen Rowell used to talk about getting near edges in nature. I decided to heed his advice and drove along this country road as it wound its way up from the valley floor in hopes of finding the edge of the fog bank. As I neared the edge, the light began to paint the mountainside with beautiful soft diffused morning light, which in turn allowed the green hillsides to have a strong luminescent glow .

This patch of lupine was actually growing alongside the road, and it added the contrast in color to the green hillsides that I was seeking. I took my camera off the tripod and moved around until I found my composition; I then brought the tripod in to match my vision. Too many times I feel we all get a bit lazy and we extend the tripod legs fully so we can stand upright. Many times the most interesting foregrounds go unnoticed near our feet.

For this image, I used my 16-35mmL at f/16, and the camera (and me) were all of 12 inches off the ground. I used a Singh-Ray 2-stop hard edged split neutral density filter along the angle of the ridge to hold back the exposure of the foggy sky. I decided to dial up my ISO to 400 in order to gain a stop of shutter speed as a slight breeze was beginning to kick up. I purposely placed the main lupine stalk in the strong 1/3 position in my frame to add visual tension.

Adding foregrounds to your images not only makes the image more interesting, but it helps create a sense of depth allowing your viewers eye to wander up and through the image. The fence line helped by creating a diagonal line that leads to the other slightly less diagonal of the ridge line, with the oak tree intentionally place in the upper left position as an intersection point for both lines.

@Marie LC: Good morning Marie, your images of mountains has perhaps inspired me to look for some fresh material of our spring hillsides.

Stunning photo Don, love the greenery and the flowers are so soft and the shape of the leaves are just beautiful. Amazing shot.

@"Marie" :-): Hi Marie, I really have the best fortune shooing foliage in the early morning when the light is soft and the air is calm. Spring afternoons in northern California can get a bit blustery. Sorry I couldn't be more specific with a book title or a website, but hopefully you are finding what you need.

Beautiful shots like this don't 'just happen' ... your preparation certainly paid off!

@Judy: Hi Judy, if you happen to belong to the North American Nature Photographers Association (NANPA), you can read an interesting article in this month's Currents Magazine written by my friend and partner Gary Hart on the 3 P's of Nature Photography, Preparation, Persistence, and Pain. I admit there are times I just go out with my camera to see what I can find, but usually my trips are planned around weather, seasons, locations, tides, moons, etc. Hedging one's bet is never a bad idea when it comes to landscape photography.

Those incredible shades of green just pop in the foggy conditions. This is drop dead gorgeous. The lupine are exquisite and provide such a strong foreground, anchoring the photograph. Simply outstanding.

@john4jack: Thanks Jack, if you were ever a Fuji Velvia shooter (or any chrome for that matter) you would have to appreciate the way greens saturated and "popped" under cloudy skies. Fortunately, digital responds the same way. When I awoke and saw the fog, I grabbed my gear and out I went! I'm unfortunately looking out my office window at blank blue skies today, but the weather is supposed to start changing tomorrow. Hope all is well.

I want to echo what Judy said about planning- It seems that the best images don't "just happen" Too often I just go around to "see what I can find" and end up chasing my tail! I need to work on the PREPARATION part of those 3 P's!

@Tracy: Hi Tracy, check out Gary's article if you get a chance - it's very well done.

Very beautiful shot. Rich green color of the grass and fog on the hills. Pleasant sight to the eye.

@Hema Iyer: Thanks Hema, our green hills this time of year are beautiful to look at, unfortunately, with little rain, they will start to turn brown soon.

Don, great shot - wonderful composition and color!! the foreground flowers make this great! Did you use the Nik Vegetation filter on this also?

I think of Velvia as the last hurrah of nature film photographers.

@john4jack: It was a great film when the light was right, but I'm getting a bigger kick out of digital capture.

A superb shot. Great idea to get only 12 inches off the ground, too. Foregrounds are a great reminder to those of us looking too far off in the distance.

@LauraS: Hi Laura, spend some time looking at David Meunch images, not sure if he ever made one that didn't include a foreground.

Is this piece of heaven you've photographed? Your skills, combined with your awesome camera made this amazing photo (s) possible. My hats off to you.

@Amir: Thank you Amir, just remember, camera's are tools, this could have easily been made with a beginner's camera. I will admit that quality lenses play a vital role, but again, they are just tools. Thanks for your nice comments.

Ohhh how gorgeous is this! Wow! Wonderful composition and colour. What a view! :o

@Magda: Good morning Magda, thanks for your nice comments.

Thanks for the plug, Don. Now I'll put one in for him (I swear we didn't plan this). As many of you know, fog and overcast is the absolute best time to shoot many things, particularly on the coast. Don has two workshops scheduled for the foggy season on California's coast. One in Mendocino in June, the other in Big Sur in August. Much of the Mendocino workshop will be in the fog shrouded coastal redwood groves, right at peak rhododendron bloom. Even if you don't sign up for a workshop, you should make it a point to get out there in June while it's still a relative secret. The same goes for Big Sur in August--every year more photographers are discovering the beauty of photographing Big Sur in fog.

I'll return you now to your regular programming....

@Gary Hart: Thanks Gary for the plug, and yes, I still do have openings for my Redwoods NP / Mendocino workshop and summer Big Sur workshop. We are hoping that the fog makes an appearance at both. Also, Gary will be assisting me at both workshops, so you will get to spend time being mentored by one of this country's premier landscape photographers!

Wonderful shot Don! The fog creeping down the hills is a wonderful addition to this shot.

@MOHAMMAD: Thanks Mohammad, I have seen images of mountain landscapes near Tehran, a beautiful location!

@Eleftheria: Thanks again Eleftheria, you have posting some fantastic images lately, keep up the incredible work!

Me too on the digital, Don. After the 60s, I didn't do darkroom work, and I am really enjoying that with digital. I have done photography since the early 50s but have gone whole hog since switching to digital in January 2005.

You are such a wonderful addition to aminus3. Each day I really anticipate your post. I think that you inspire many more of us than you realize. Being on aminus3 may result in some of your most valuable teaching. Sometimes I feel like I am ripping you off! Thanks for your gift and your contribution.

woooow.great
this is wonderfull.
thanks