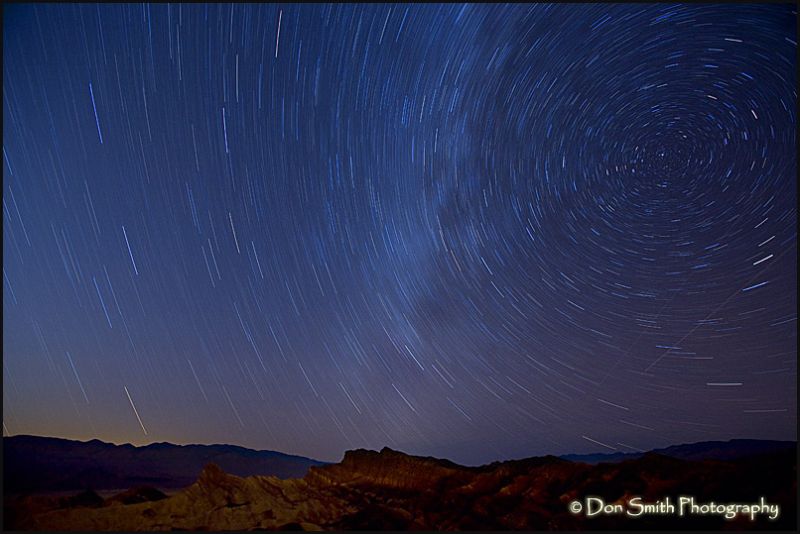 Death Valley's Zabriskie Point is one of those iconic locations that has been photographed by virtually every photographer/tourist with a camera. So how does one make an image from such a photographed area stand out? For those workshop participants who attended the Gary Hart Death Valley Winter Workshop, the answer was to photograph after the moon set!

After first attempting a similar shot to the east, I quickly became frustrated with the heavy light pollution emanating from Las Vegas. I decided to turn towards the northwest and include the north star. I have to admit, it was a bit of a lucky guess when it came to finding the star, and I wasn't quite sure if I included enough of Zabriskie Point, but a 26-minute timed exposure and a subsequent black-frame produced this stunning result!

Manly Beacon is the triangular shaped formation in the lower left of the frame. One of the benefits of digital capture is the lack of worry over reciprocity failure - there simply isn't any - so math calculations apply across the board.

If you would like to join Gary and me on an upcoming workshop and try your hand at night photography (as well as other special times of the day) in some of the most beautiful locations in the western United States, please visit my website at http://www.donsmithphotography.com and click on the workshop link.

Beautiful image. The sky is amazing!

@Sergei Z: Thanks Sergei for joining in - hope to hear from you again!

Dear Don, a great shot - it looks like even the milky way galaxy showed up on the photo as the cloudy areas through the center of the sky - nice work and you did a good job of locating Polaris!!

@Scott Schilling: Thanks Scott, it was so dark out there that night that it was just point and hope. I'm learning more and more about the constellations, but I am still in the novice category.

I dream to do that one day ! Fantastic. We're spiraling endlessly...

@zOOm: Florence, it is actually very easy to make this kind of image. Make sure your camera is on a steady tripod, set your ISO at 400, I used f/5.6 here, and set your shutter in bulb mode and use a locking cable release. If the sky is really dark (absent the moon and/or any light pollution from a nearby town/city) give it 30 minutes and you should be close. Remember to turn on your "long exposure noise reduction" in your menu setting so the camera can write a "black frame" to reduce the noise build up.

@Eleftheria: As always, I appreciate hearing from you. I was on your blog the other day, you are doing some really nice work.

Many thanks Don for your technical advice ! I'll try that one day or another... and my first attempt will be dedicated to you ! :-)

@zOOm: I look forward to that!

@peter: Thanks Peter - I think the key is having a really dark night. Any ambient lingering on the horizon will record, even when our eyes cease to detect it.

@Double KK Photography: Thank you - you do great work also.

Stunning, yes! Thanks for sharing the technicalities behind this shot, Don. (Got it right this time!) But why is this under the Food and Cuisine category? :-)

@EstherK: Hi Ester - I have to chalk it up to sleep deprivation!

great long exposure! i have to check up on that "long exposure noise reduction" feature as when I tried shots like this the noise was way too visible and annoying...

@DarkElf: Hey Dark Elf, yes, do turn it on and you will notice a huge reduction in noise. Just remember, it will be wrting a dark frame for the same amount of time as your exposure so make sure you have fresh batteries - and a bit of patience. Thanks as always for you comments.

What an amazing image Don... well done you. Could you explain why the center of the vortex is off to the right, is that the north pole..?

Also the two streaks, are they satellite traces ?

@Observing: The center vortex is actually the north star, and the two streaks are actually commercial jets. I spent quite a bit of time trying to clone them out and discovered I was making more of a mess than it was worth. In the final image I will prep and send to Getty, they will be gone - it will be about a 2 hour job - and a couple glasses of wine!

@Helma: Thanks Helma. I bet you can do something similar in the mountains above Tehran where I've seen many of your images captured (just make sure you chose a moonless night). You actually inspired me to learn more of your area and I spent quite some time on Google Earth viewing your area - quite impressive to say the least! Thanks for your continued support - I hope all is well with you.

i like this and want to give it a shot myself !
each time i look at your blog i learn something new. thanks so much for your advice and suggestions, it is much appreciated! jim

Hi Jim - thanks for your nice comments. After 30 years making a living with my camera, I feel it is now time to teach and help others. I was very blessed in my journey as I had many professionals share their knowledge with me. As the old saying goes: "it's time to pay it back." The key with doing a shot like this is to make sure the moon has set. Digital cameras are so sensitive to light that our eyes can't detect, it will astound you. Just pick an area and give it a go!