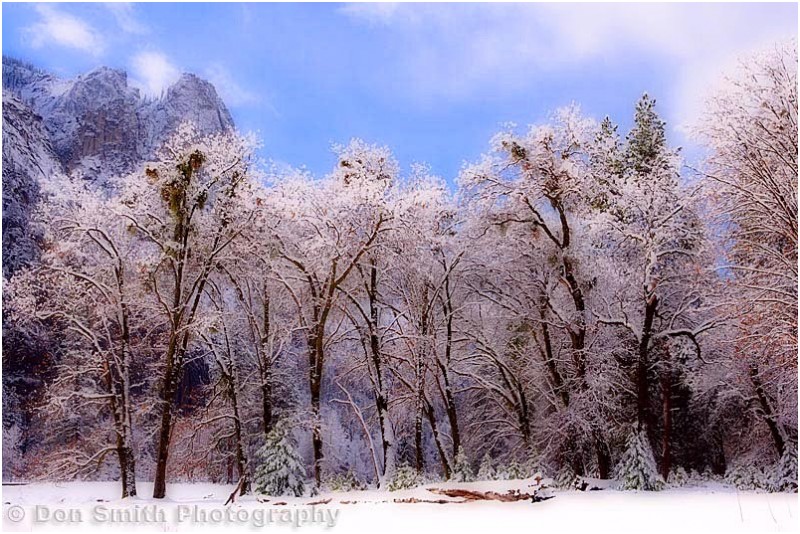 I thought I would take a break from posting summer images and plunge head first into winter! I came across this image during an edit the other day and remembered I did a technique called the "Gallant Dreamscape" after a style made popular by a noted French photographer named Andre Gallant. He used to take two slides of the same scene, one at +1 and one at +2. The +1 slide would be defocused. He would then sandwich them and create one "Dreamscpe" image. There is an easier technique in Photoshop untilizing a single exposure such as this image. On its own it was a good image, but lacked impact. I took the image into Photoshop and duplicated it (Image>Duplicate). I then took one of the duplicated images, and using Curves, lightened it to look about +2 stops overexposed. I then went to the normal exposed image and under the Filter menu went to Blur>Gaussian Blur and defocused it about 20%. Finally, I dragged the overexposed image over the top of the defocused image and in the Layers Palette (F7), changed the blend mode from Normal to Multiply. If needed, you can change the opacity to lighten the image. I then flattened the combined image and had my own "Dreamscape." It's a fun way to enliven photo that's "not quite there." To see more of my images and read more "how-to" articles, please visit my website at http://www.donsmithphotography.com.

Interesting! Thanks for the technical explanation.

Marion from Nanaimo, BC, Canada

this is beautiful ! I love the snow ... don't have much where I live (South west of France)

The frosted effect looks really cool, this would look great as a Christmas card or calendar

Thanks for your nice comments. It's something fun and different - and it's easy to do!