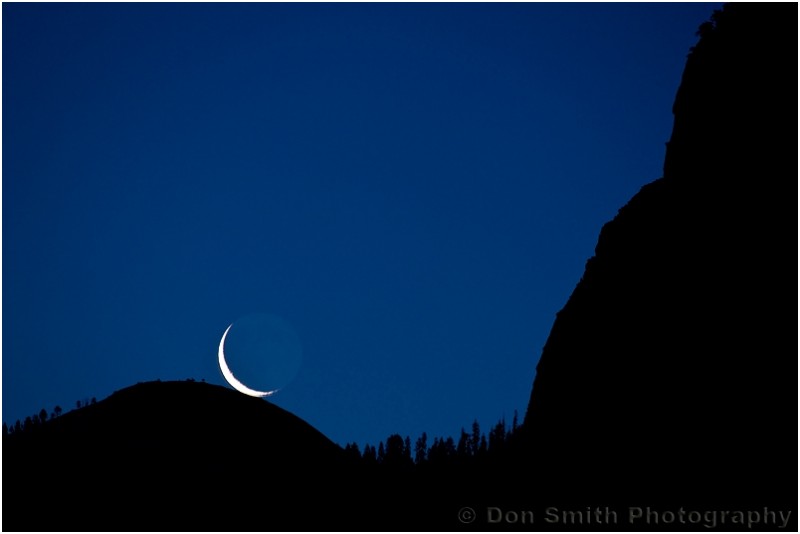 Sentinel Dome and an Old Friend

Posted by Don Smith (California, United States) on 12 May 2008 in Landscape & Rural.

A waning crescent moon appears to be resting atop Yosemite's Sentinel Dome during its ascent in the predawn hours.. I owe much of the success of this image to my friend and colleague Gary Hart who with the help of topo maps and data from the NOAA, precisely predicted the time and place of this moonrise. Gary and I were leading a spring workshop at the time and were less than popular when we announced an earlier than usual departure time from the hotel. Most of us were up by 4am, but the early call payed off handsomely. I opted for a tight view and added a TC-1.4x converter to my 100-400mmL Canon lens. (giving me the equivilant of a 560mm lens on my full frame sensor). Knowing that the moon and stars move at a rate of 1/4 degree per minute, I chose the best combination of ISO, shutter and aperature to capture this image without sacrificing quality. At 560mm on a full frame sensor, my angle of view is a mere 3.7 degrees. With the above stated knowledge that the moon moves one degree every four minutes, it would move completely across my frame in aprroximately 15 minutes (900 seconds). I felt comfortable that a 5-second exposure would freeze the moon's movement (roughly 6/100 sec.). To see more of my landscape imagery, electronically view the first 15 pages of my book On the Edge, or learn how you can join one of our workshops, please visit my website at http://www.donsmithphotography.com

Haven't heard from you in a while. Hope all is well. I guess timing is everything.

wonderful capture -- love the faint trace of the dark-side of the moon. wonderful rock silhouette brings the eye from the top right to mid bottom left. excellent job!